I book my ticket back to Beijing!

A rather long gap between posts, partly as I made a google map of our route in April and have wasted time unsuccessfully trying to embed it in a post!
The latest news is that I have now booked a flight back out to Beijing and hope to restart the ride as soon as possible after I arrive on the morning of July 17th. You may gather from this that I am feeling much better. I have been attending physiotherapy sessions, and doing some walking and swimming, although I have not had the opportunity to get back on a horse as yet.
Posted by Megan Lewis at 17:54 3 comments:

Here at last are some photos of the launch day on April 19th which Kubi has sent. With all the excitement and worrying if Zorbee would behave himself, I forgot to take my camera along, and I still have not acquired photos of the flag presentation by the President of the CEA (Chinese Equestrian Association) and Representative of the Chinese Olympic committee.
However, the photo below shows the riding team (Peng Wenchao, Li Jing and myself) parading with members of the CEA, some of whom are waving yellow CEA flags. You may gather that cowboy attire is de rigeur in China. Peng (in yellow top) is riding Zorbee and caped crusader Li Jing is on his horse Yura. Worrying that the zippy Zorbee might panic at the flags and I might reach London faster than I had anticipated, I had played safe and opted for the steadier Bajiu. In the event the horses all behaved (almost) impeccably and were a credit to the side.
The parade was accompanied by soul stirring music over the loudspeaker. 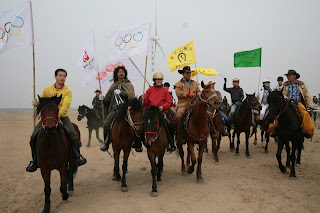 After all the pomp was over, we set off quietly behind the endurance riders. Here is Peng and I by our wonderful trailer which has been signed by media, friends and followers. 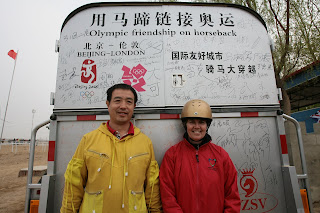 The first section was across the Kangxi grasslands, where great windmills loomed out of the haze like something from The War of the Worlds. I am now back on Zorbee, having swapped with Peng. Mr Wan, our driver, rode with us for some of the way on the thin horse. 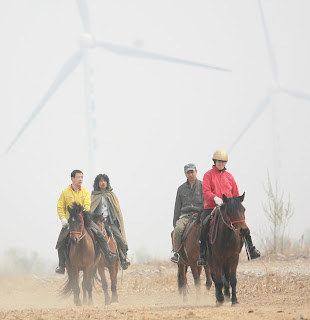 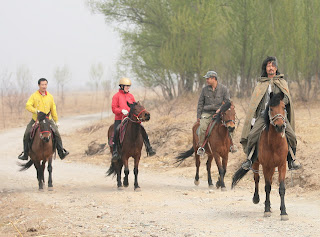