We have lost our outrider come photographer, as John sadly had to leave us last Thursday to catch the train back to commitments in Atyrau. Rowena and I have been plodding on through the sand, although thankfully the weather has turned cooler again. Rowena is constantly spying all sorts of fascinating wildlife which passes by her blind old aunt unseen. Tally so far :
Foxes – Rowena 1, aged blind aunt 0
Hares – Rowena 6, aged blind aunt 0
Though I am ignoring the herds of wildebeest and gazelle sweeping across the steppes she is now claiming to see.
Yesterday we came across an unexpected bonus after a tiring day’s ride – a café! 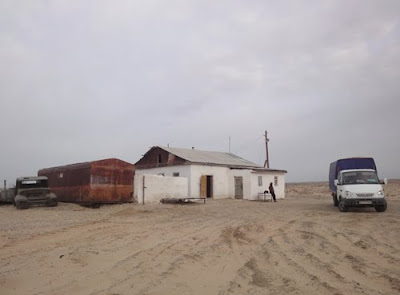 It did not take much for the delightful lady proprietor Jana and her sidekick Zhena to persuade us to sleepover. Here are Rowena and Bauzhan tucking into a Kazakh version of chicken and chips while Jana pours the milk tea. This room was also our bedroom for the night. 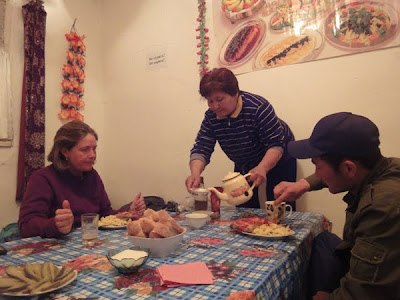 The horses in the meantime were accommodated in a corral next to the camels – a quick dose of camel aversion therapy for Zorbee who is still very suspicious of them. 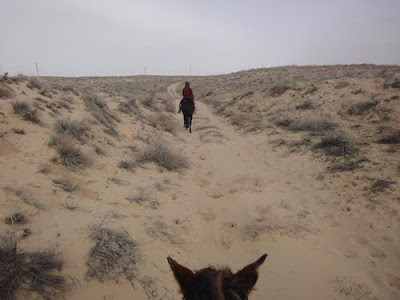 A pleasant morning ride through sand dunes on what would have been the shores of the Aral Sea brought us to Aralsk, a former fishing town now several miles from its source of fish.
Rowena rides in past the old harbour which has no outlet. 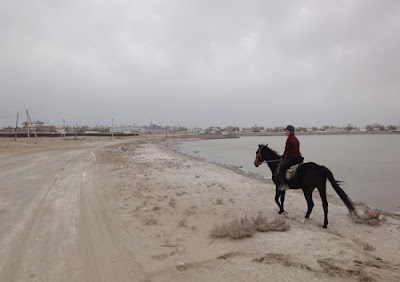 We are having a day’s rest here at Aralsk Towers, or rather the Aral Hotel, a bleak Soviet block run by the a couple of fierce and unfriendly sisters Grimm, aided by their kitchen accomplice – a grumbling old crone who feigns severe deafness in the presence of foreigners. 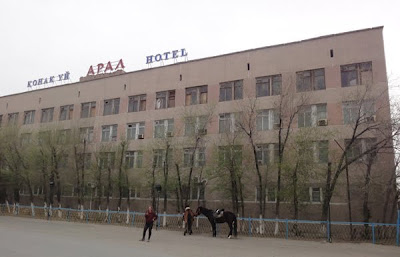 I had been particularly looking forward to a shower as the chances of getting one in the next month are slim. So it was rather disappointing to find our shower is in fact a meagre trickle of hot water from the tap in the cramped bath. So it is back to the basin. But at least the water is hot, unlike in the first room we were offered.
Posted by Megan Lewis at 16:06 No comments: