The patter of tiny hooves 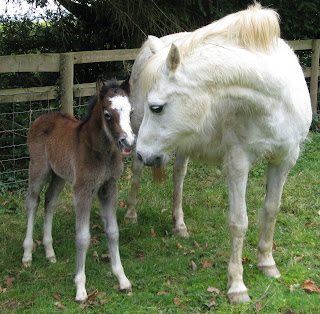 Aaaaahh! Our first spring arrival today in the form of a bouncing colt who made his way into the world at about 2.45 a.m. early this morning. He is by Cwrtycadno Cymro out of Millcroft Simone and is a full brother to the ill fated Sion, who is looking gloomily over the hedge at another brother who will no doubt make the grade. The foal is a robust little chap with a woolly coat, so although he foaled in we will leave him out in the paddock tonight.
Posted by Megan Lewis at 19:13 No comments:

Our two year old colt (now gelding) Pontsteffan Sion is just back from being castrated and looking a little down in the mouth. He was bound for Australia as a stallion last year, but unfortunately for him one of his testicles failed to descend, so he has been denied a life of ease with the ladies, and his younger brother has usurped him. If anyone out there wants a cracking Section B gelding with an excellent temperament, he is for sale. 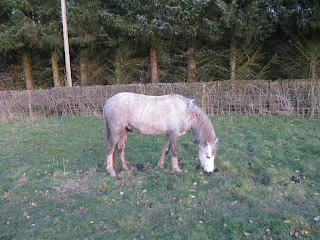 On the way to fetch Gethin and Iona from uni on Friday, I called in at the Outdoors Show (I had free tickets!) which turned out to be a detour well worth making. I even discovered Rowena's neighbour James Moreton presiding there in a yurt (or ger as the Mongolian version is called) He and his wife Karina run travel company http://www.panoramicjourneys.co.uk/ which runs off-the-beaten-track holidays in Mongolia and Bhutan.

We are all anticipation at the moment, as one of the Section B mares, Millcroft Simone (property of fellow breeder and friend Rob Jones who keeps his ponies here) is dripping milk and due to foal before the night is out.

We have just had a press conference in Beijing for the Chinese media. Both Li Jing and the trusty Mr Peng were present, but I had the surreal experience of taking part via Skype. Slightly disconcerting to catch echo of my voice over the loudspeaker at the other end 5000 miles away - do I really sound that posh? David did a sterling job of translating, and I was impressed to hear him bandying equestrian vocabulary such as ma an (saddle) around.

There was a certain amount of media concern that a doddery old senior citizen such as myself would be able to hobble her way across China. They seemed mollified when I pointed out that a British woman even older than me (Rosie Swale) has just RUN round the world.

While waiting for feedback, I was called by ITV Wales, who want to cover the ride. A palpable media frenzy for Pumpsaint!

I am pleased to say we have three new sponsors. Charles Owen have donated a ProII skull cap to replace my decidedly dodgy old riding hat. To the highest safety specifications for which Charles Owen are renowned, it is also lightweight and well-ventilated with gold heat reflective paint. To complement this I am being sent a safety helmet shade all the way from Australia by bush hat company Cutana, who make wonderful shady brims in a variety of colours to fit on safety helmets. My fears re sunburn are thus gone!

On the first stage of the ride I forgot to sort out safety reflective gear, which I bitterly came to regret after a couple of scary moments riding on Chinese roads after dark. Shires Equestrian have kindly offered to provide said gear to keep me safe.
Posted by Megan Lewis at 12:58 No comments: 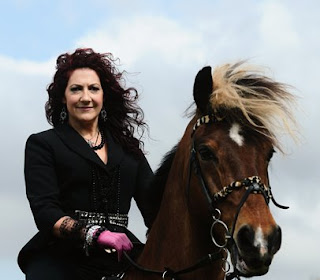 Opera singer, actress, TV presenter and local girl Shan Cothi - but better known in this neck of the woods as the sister of top notch local farrier Eirian Morgan - has sent a few words of encouragement to spur me on. She has also been riding for charity - in her case a 300 mile ride from from North to South Wales on her handsome Welsh cob Caio. The aim? To raise money for pancreatic cancer following the tragic death of husband Justin from the disease. See http://www.amserjustintime.org/ I had wished to be part of the supporting horde when she swept through home village Ffarmers, but unfortunately I was already in China gearing up for the first leg of my own ride! She is planning to link up with the BHS to raise money for the charity through a BHS ride in the Brecon Beacons in the not too distant future - if you live in South Wales and have a horse, watch out for it and join in!
Things are still progressing on the ride front. Following a meeting with the CEA, a government bigwig from the Chinese People's Association for Friendship with Foreign Countries has agreed to help the ride. This sort of thing should make every difference with bureaucracy down the line.
On Monday there is a press conference in Beijing at which I am spookily expected to be present via Skype. This promises to be very interesting, but not in a way I would relish - I suspect the least of my worries is getting up at some ungodly hour of the morning to sit at my computer.
Thank goodness I will have the redoubtable David McNeill to interpret my thoughts - hopefully with a bit of poetic licence.
Another bit of good news is that I am being sponsored a Pro II riding helmet made by Charles Owen. My riding hat has defintely seen better days and I had concerns whether it was up to current safety standards. Charles Owen are not only based in Wales, which is as good a reason as any to wear their hats, but also have an unrivalled reputation for manufacturing high safety spec riding gear. The Pro II is a low profile, well ventilated hat which should prove ideal.
Posted by Megan Lewis at 18:29 No comments:

New CEA website header with star billing for me and our new team member Li Jing, a Chinese horseman and ex librarian who has already built up quite a reputation for his horseback travels in Russia and China. He has been cutting quite a dash in Beijing by sweeping down from the north like a modern day Mongol, cloak billowing behind him.

And an on the move video taken by a passing motorist :-

And an article in China Daily

I have now actually booked my flight out to Beijing for April 5th to arrive on the morning of the 6th. This gives nearly two weeks to gird up my loins before the start of the next leg of the Long Horse Ride on the April 18th. This has been set to coincide with the Guangting reservoir Endurance Ride. 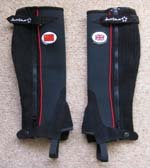 And here are my new Just Chaps, especially designed for the ride, and the ultimate in equestrian sartorial elegance. Black wih red piping, they sport Union Jack and Chinese flag on opposing legs. They are excellent quality, and extremely comfortable. I can't wait to show them off at the start of the ride next month! See http://www.justchaps.com/ for their range of colourful chaps for every occasion.
Posted by Megan Lewis at 13:08 1 comment:

February Fun in the Snow 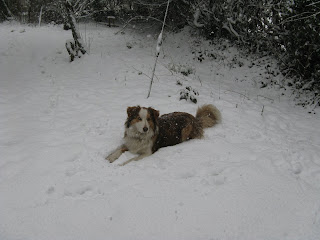 (This post was published late!) Snow has been falling all around and Dyfi our sheep dog has been bounding everywhere in seventh heaven. However it has meant more work for me trundling wheelbarrows of hay out to the field in front of the house for welsh pony stallion Cwrtycadno Cymro and his two mares. Thankfully I don't need to worry about the ponies down by the river as they have two big bales to keep them happy. 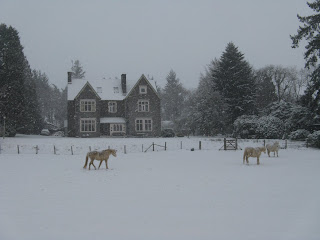 I am only left with the little Welsh filly foal now, as friend Sarah Ollis has bought and collected Cwrtycadno Pahang - a lovely big bay colt by Welsh cob Maesmynach Flyer out of my endurance arab Silver Sea Gem. He is destined to follow in the hoofprints of Cwrtycadno Zeus, another part-bred Sarah bought from me a few years ago. Zeus has had a very successful endurance career, and last year was winner of the Cairo award for the best part-bred arab in EnduranceGB's annual awards. after his half brother Cwrtycadno Keltic Star the year before. So Pahang has a big act to follow!

Arrangements for the ride have been progressing well thanks to Irish lawyer David McNeill who has helped to negotiate an agreement with the Chinese Equestrian Association. And the British Equestrian Federation have agreed to help out with contacts in the countries we pass through as well as publicising the ride on their website.

However we are still desperately looking for some financial sponsorship to help cover the costs of running the China section. Any suggestions gratefully received!
Posted by Megan Lewis at 12:30 No comments: