Daughter Iona will be playing harp beside up and coming artiste Laura Mvula in the itunes festival tonight.   Tune in to   http://www.itunesfestival.com/gb/live   at 7.45 pm. 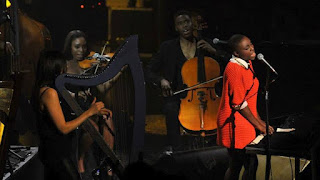 Later:  For not very good recording at the festival of one of Laura's songs see http://www.youtube.com/watch?v=_gRLzA2cbFU    With Ions harping on (and singing) in the background (on left in photo above).

And again but you can only hear not see Ions on harp.  http://www.youtube.com/watch?v=hyupt7_iFfk&feature=related
Posted by Megan Lewis at 12:06 No comments:

Nearly a month has gone past and I am once again way behind with my blog.  Suffice it to say that I arrived safely in Wales on August Bank Holiday after a fairly uneventful but sometimes wet ride from London.  After leaving London I rode via Windsor, Henley and Goring and along the Ridgeway to north of Swindon, then northwest to Gloucester, where I crossed into Wales.  Then via the Forest of Dean, Abergavenny, Brecon and Llandovery to home.
Since then it has been an uphill struggle to cope with unpacking, unanswered mail, unpaid bills, domestic affairs, horses, houses, family and life in general.  Not to mention surviving 'Ffrwdfest', the weekend of fun and games at our home Ffrwdfal organised by my three children - this year's theme was unsurprisingly The Olympics!  And of course my arrival home from my Olympic ride was one of the star events. But more of that later.

Many thanks to all those who helped and hosted me on my journey home.
This includes old school friend Sarah Wilson who carted me around and provided full board and lodging (highly recommended!) for several nights at her home near Reading, and ex work colleague Theresa (and husband Trevor) who provided Zorbee and I with accomodation and a great welcome in the Forest of Dean.
Thanks to Mount Mascal stables in Bexley for accomodating both Zorbee and I at the beginning of the leg, Vauxhall City farm for looking after Zorbee overnight while Anna Bruce (PR for HOOF London and Ms Fixit for my London arrival) hosted and entertained me (nothing like a film and a glass of wine or two to relax). Deen City farm gave us a welcome lunch stop, while Park Lane Stables looked after us in grand style with a stable for Zorbee and a plush hotel for me!
Thanks also go to Jason Warner of the Cotswold Riding Centre www.cotswoldtrailriding.co.uk for looking after Zorbee for two nights while I had a break, and helping me collect my car from Swindon. In Wales I was hosted by Cathy and Dave Bowen at their delightful and highly recommended B&B www.penylanfarm.co.uk and Zorbee was provided with accomodation at the Rotherdale stud of Welsh cobs (thanks Wendy and Laura) and the Cantref Riding Centre www.cantref.com. Last but not least, on home territory, friend Terry Brunton who stabled Zorbee and came out to guide me in on her ATV when I was coming inat dusk after a long day's riding, and friends Anthony and Ann who stabled Zorbee the night before my official arrival HOME.