A Missionary in Belgium

I had a lovely unexpected surprise on Wednesday when Kris Annaerts and Sabrina Proost from Belgium turned up on my doorstep.  It transpired that about ten years ago Kris had bought Cwrtycadno Cenhadwr, a young colt that I had sold to Holland and subsequently lost track of.  Quite a timely re-discovery as he is a full brother to my 2013 Royal Welsh Champion Cwrtycadno Perlen (see previous post) and the first foal by Cwrtycadno Cymro.  He was called Cenhadwr (the Welsh for missionary) as we had just moved into our present home Ffrwdfal House which had previously been set up as a religious retreat for returning missionaries, and the colt was one of the first ponies I exported to the continent.
At the time he was born he was a great disappointment as I was eagerly hoping for a filly foal, but had to wait another two years!  However he has landed on his feet, or should I say hooves, leading a fulfilling life as a marathon driving pony.  Kris and Sabrina gave me lots of photos and video clips of him in action.  Here he is in his role as lead pony in a tandem..... 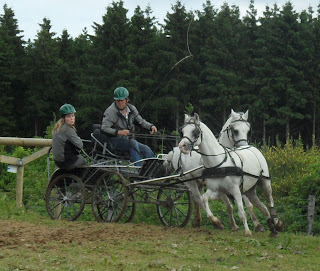 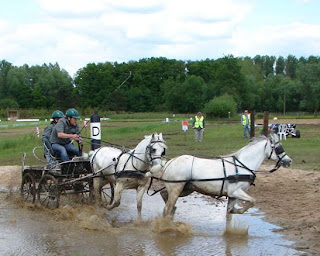 Absolutely thrilled to bits that my Welsh pony mare Cwrtycadno Perlen trotted her way to victory last week when she was awarded the Overall Welsh Pony Championship at the Royal Welsh Show, arguably the highest accolade in the Welsh Pony showing world, and a once in a lifetime achievement for most people.   It was particularly gratifying as it is the only time I have won it as an owner-breeder. 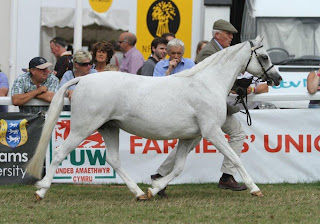 Many many thanks to Tom Best and David Blair of the Waxwing stud (where she has been on lease while I have been riding in foreign parts) for producing and showing her so superbly once again - last year she was Reserve Female Champion.  A tremendous effort considering these have been her only two outings as an adult! 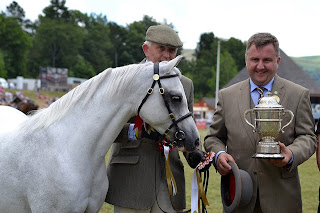 Perlen (and handler Tom Best) receiving the Coed Coch cup from judge Meirion Davies of the Heniarth stud, Perlen apparently fascinated by the cup!  She also won the Queen's cup which is awarded to a different livestock section every year - unfortunately no longer by Lizzie in person!  And of course a coveted gold Welsh Pony and Cob society medal to add to her silver and bronze ones. 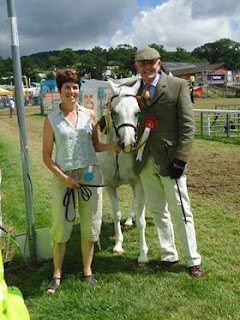 ...a proud and excited owner who had just scrambled over the fence into the ring, with Tom and Perlen - the pony may look resigned, but she can now afford to rest on her laurels!  Photo taken by visiting Ozzie friend Toni.

Unsurprisingly the bubbly came out in force at home, and not least because our Dutch guests Geert Verbaas and Marit Timmermans won the Junior Mare class with their lovely mare Stougjeshoeve Emilia and also a third place with a two year old filly.
Other successes were a 3rd place in the yearling colt class for Coriolan de L'Aurore out of my mare Cwrtycadno Colomen (on loan with Ingrid Delaitre who took the lovely photo of Tom and Perlen in middle), and 4th place in the two year old colt class for Debbie Thomas's Waxing Glimmer who is out of my mare Cwrtycadno Glain (on loan with Perlen at the Waxwing stud).