I often dismount and lead Zorbee to give both of us a change and a rest. In Asia people can never comprehend why one would possibly want to walk on foot when one has a perfectly good horse to ride, and as a result I often get strange looks - although of course this may be for other reasons! 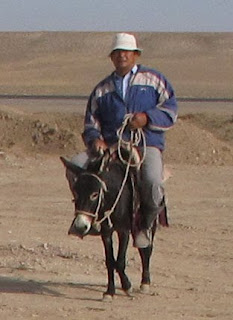 For my part I can never understand how very large men can possibly be comfortable riding on very small donkeys, when they are in possession of perfectly good legs which nearly reach the ground in any case - and if they have a donkey they will not walk even a step. 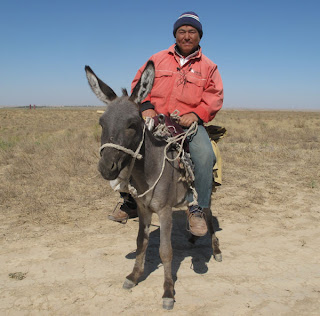 Above - herdsman Talgat who invited me to join him for chai near Shayan. 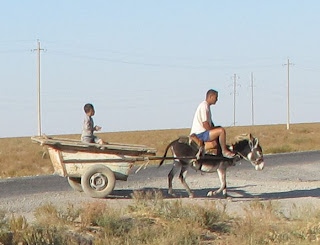 As in many other parts of the world, donkeys are expected to work like, well, donkeys. The photo above gives a new meaning to the phrase 'Ride and Drive' and is a fairly common sight though usually not with such a lump on board. 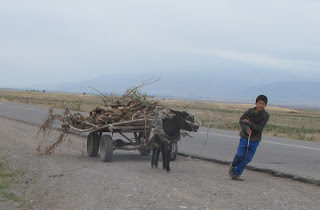 Surely it would be easier just to pull the cart oneself? 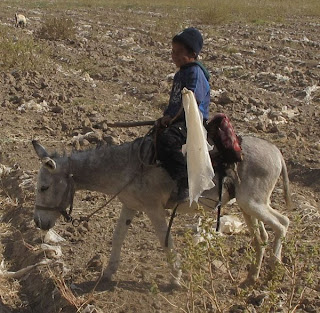 This self possessed little boy was better suited to his mount than some ofthe examples above. He must have only been about 6 years old, but armed with plastic bag on stick, he was in sole charge of a large flock of about 200 sheep and goats.

On our day off in Turkestan I was eager to visit the ancient ruined oasis city of Otrar, which lies about 50 miles to the south. In 1217 it was the somewhat ill considered decision of its governor Inalchuk to arrest merchants sent by Genghis Khan on spying charges, the situation being exacerbated when they were subsequently put to death - not good thinking. This suidical action precipitated Genghis Khan's swift conquest of the lands of the Korezmshahs which included this southern area of present day Kazakhstan - Inalchuk was executed and Otrar razed to the ground. Having recovered from this setback, it later achieved notoriety as the place where Timur died of fever.
But unfortunately due to our other activities we did not have time to make the 100 mile round trip there. 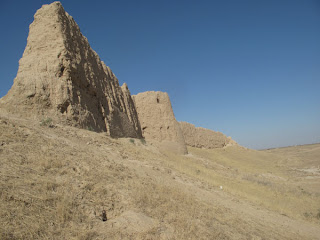 So after a day's riding across the flat desert steppe land of the Syr Darya valley it was a great excitement to see the crumbling walls of the old Silk Road city of Sauran rising up in the distance. Sauran escaped the fate of Otrar by wisely surrendering to the forces of Genghis Khan without resistance. At one point it was the largest city in the area that is now Kazakhstan, but with the rising prominence of Turkestan it was virtually abandoned by the 18th century. 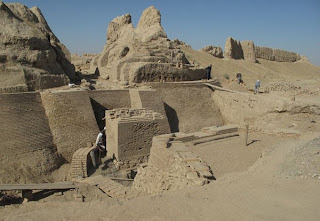 It is now crawling with archaeologists excavating and developing the site. Restoration includes the controversial method of using new materials for partial reconstruction, as you can clearly see with these steps up to a madrassah at the centre of the site. 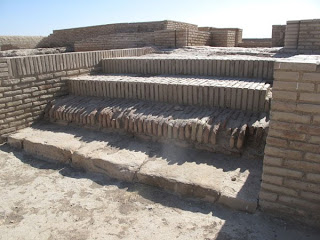 Apart from the madrassah, they are currently working on the remains of a mosque, which can be seen in the middle distance in the photo below. The city walls are on the horizon. 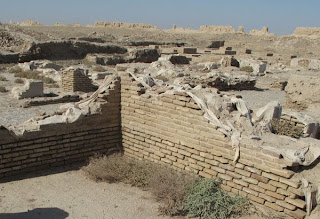 The workforce are a cheerful and friendly bunch and even invited me to join them for lunch. One of them is perusing a copy of my consulate letter on the right - I find it indispensable for quickly explaining who I am and what I am up to! 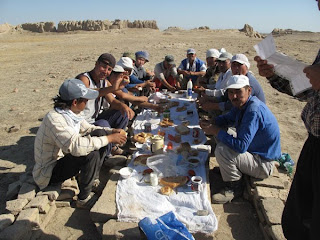 We are now following the valley of the Syr Darya, or ancient Jaxartes river, and have reached the Silk Road town of Turkestan. En route I discovered the culprit below skulking behind the treeline bordering the road - cotton! 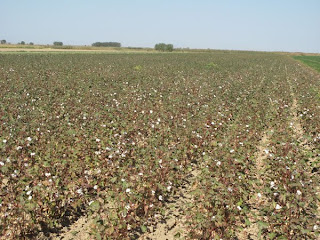 It was the diversion of water from the Syr Darya and Amu Darya (Oxus river) to irrigate the deserts of Central Asia for cotton production such as this which resulted in the tragic dessication of the Aral Sea, which is fed by these two great rivers. By 2004 the Aral Sea had shrunk to about a quarter of its original size. But more about the Aral Sea when we reach it next year. 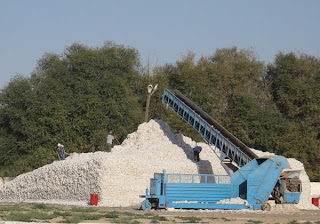 An enormous pile of 'white gold'.
This productive irrigated area also grows other crops such as melons and tomatoes - here is a novel use of an old bus as a roadside melon shop. 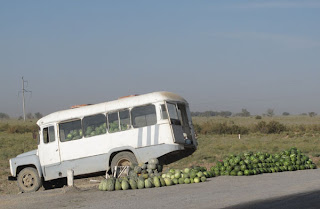 Having found a local family on the edge of Turkestan to look after Zorbee for a couple of nights, we are staying at the Yassi hotel, which is clean and comfortable, but with the usual Kazakhstan quirks such as hot water only after 8pm. The restaurant served 100 year old cow and there was no milk for the tea. But it is conveniently directly opposite the major Turkestan attraction and important Muslim pilgrimage site of the Timurid Kodja Ahmed Yassuai mausoleum, and we were able to stroll over there after a milkless breakfast tea this morning. 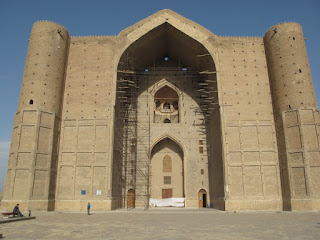 You can get an impression of the size of the mausoleum by the size of the figures - the tiny blue thing to the left of the archway is me. Behind the huge facade is a stunning blue-tiled dome which cannot be seen in the photo.
The mausoleum was commissioned by Timur - sometimes better known to us as Tamerlane - in memory of 12th century Sufi mystic Ahmed Yassuai.

As well as pot noodles, our diet while camping has largely consisted of sausage and increasingly stale nan bread. This has occasionally been relieved by a visit to an all too rare roadside eating establishment, and on crossing the Karatau mountains and reaching relative civilisation, we were looking forward to the possibility of a decent meal. Thus it was with a sense of eager anticipation that we arrived at the wild west town of Cheyenne, or Shayan in its Kazakh incarnation, which boasted this imposing gateway as evidence of its supposed status. 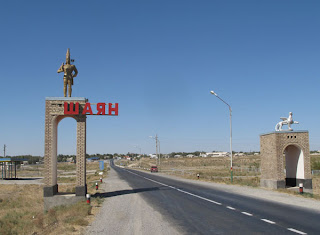 In China any self-respecting town of this size would contain at least several dozen well patronised eating places. So Bakhram bounced off happily to scout for one, but returned to report woefully that he had only found one cafe and it had run out of food. That is Kazakhstan for you. Heigh ho. So it was back to the local shop to stock up on sausage and bread again - although at least the bread was fresh.
However after several hours riding across the steppe the following day ......

.......we were rewarded when we reached the main Shymkent-Turkestan road to find this delightful little restaurant, where Zorbee polished off half a bale of hay while we tucked into shashlik and laghman, with a pile of nan and a big pot of milky tea. 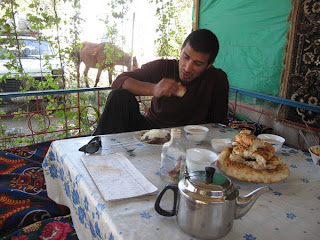 My husband enjoys his meals, and is continually pestering me as to what the food is like in Kazakhstan, so for his benefit and yours, here is a very brief pictorial guide to the main elements of Kazakh cuisine. 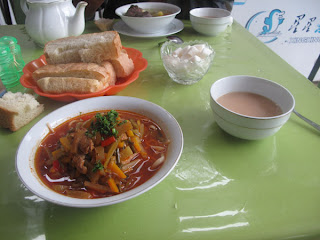 Laghman is a dish of spicy meat and vegetables served on a bed of noodles. You cannot see the noodles under the topping in the photo above, which also shows the plate of bread and teapot of milky tea which is commonly served with meals. 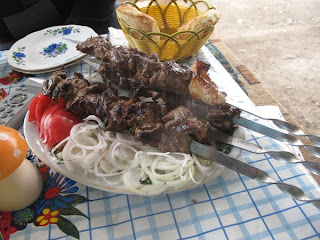 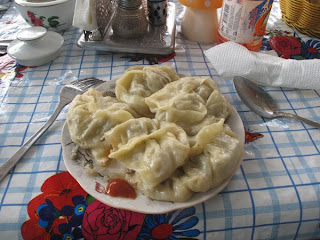 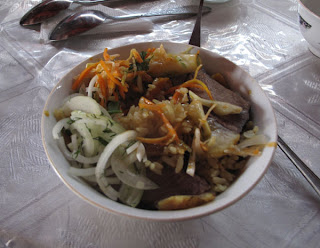 Plov - a rice based dish cooked with meat, carrot and onion. It may also contain raisins. 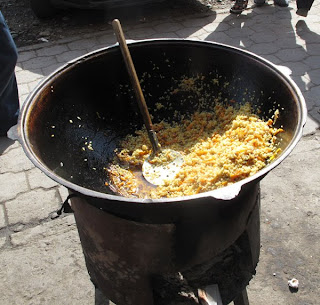 This is plov being cooked up on a street brazier. 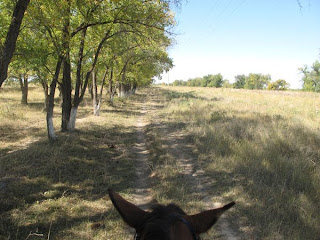 After leaving Taraz on Friday, we worked our way along the northern side of the Karatau range to the small town of Karatau, where we struck westwards across the mountains towards the Syr Darya river valley. Along the road to Karatau it was always possible to ride over the steppe land at the side. 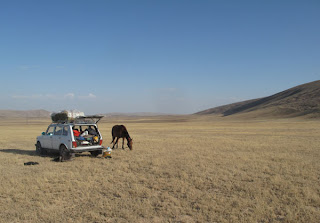 It transpired that the road I had originally planned to take no longer existed, but with the help of local advice, including herdsmen en route, we were able to follow a rough and remote track all the way over the range. The snowy peaks of the Zailisky mountains came into view again, but so far in the distance that they do not show up on the photo below. But I promise they are there! The blackened 'Mordor' like appearance of the hills is due to burning off dry grasses, presumably to promote fresh growth. 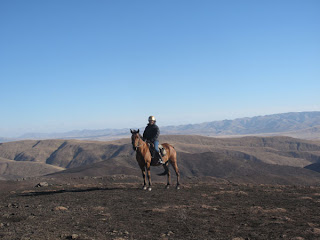 The only people we met were a small group of amiable herdspeople tending a large flock of sheep and goats on the high pastures. To my surprise they turned out to be Kurdish. Here are the 'boys' looking immensely pleased with themselves at having persuaded me to immortalise them in pixels, while the missus looks on resignedly. 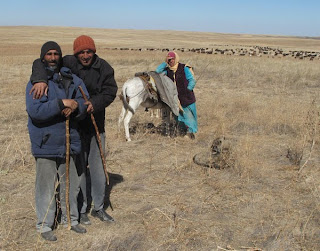 She had every reason to look a trifle fed up a few minutes later when another member of the clan turned up with one of their sheep slung over the saddle - its throat torn out by a wolf. 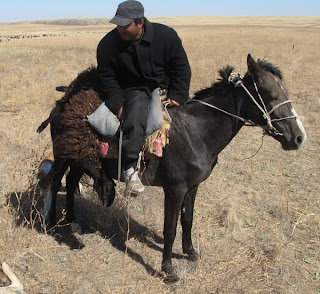 An uneasy reminder of the presence of wolves in these parts, though Bakhram assures me they will not attack a horse with a person. And we had a peaceful lupineless night at this secluded spot high in the hills. 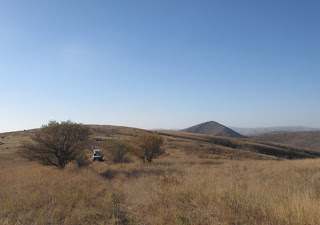