They may sound like a female comedy double act, but they were in fact a trio of intrepid British missionary ladies, namely Mildred Cable and sisters Eva & Francesca French, who crossed the Gobi desert along the northern Silk route five times in mule carts in the 1920s/30s. They wrote and lectured extensively about their experiences, and many years ago when I was eighteen, my father gave me a copy of their aptly named book ‘ The Gobi Desert’. I was immediately captivated by its descriptions of oasis life, braving bandits and travelling by moonlight across barren and desolate landscapes. As a result I have always had a sneaking desire to emulate them – in their desert travels, not their evangelising – and now find myself with the opportunity to do so, although doubtless things will have changed beyond recognition since their time. We will see.
I plan to try and retrace their 1926 journey across the Gobi via Yumen, Anxi, Hami and north of the Tian Shan ‘mountains of heaven’ to Urumqi. Where they followed rutted desert tracks in carts pulled by mules, including their faithful pet mule Molly, there is now a railway and main road, and possibly even an expressway – it is difficult to keep pace with the speed of construction in China. Although I have managed to identify most of the places they visited and/or stayed, some of the oases appear to have completely disappeared with the coming of lorry transport. No longer do camel caravans, mule carts and herds of donkeys carry goods across the desert, but in effect the modern ‘oasis’ is the petrol station. But it will be fascinating to see to what extent life in this part of the Gobi has changed over the last eighty years.
If you are interested in learning more about ‘the Trio’, their books including ‘The Gobi Desert’ and ‘Through Jade Gate and Central Asia’ are easily available on Amazon. Professor Linda Benson has recently written an excellent and well researched biography ‘Across China’s Gobi’ and Australian journalist Kate James a most entertaining account ‘Three Women of the Gobi’.
A postscript. I was thrilled to discover in the 1901 census that the French family lived only a couple of streets away from where I was brought up in Bedford Park, London. And my Beijing host Caroline now tells me that husband David’s mother actually attended one of Mildred’s lectures when a child, and entered into correspondence with Topsy, a little deaf and dumb Tibetan girl adopted by Mildred.
Posted by Megan Lewis at 12:59 No comments:

My nine day train journey to Beijing was not without its setbacks, the first panic being in Brussels when I discovered to my horror that my precious laptop had gone missing. Just as I had abandoned all hope and was about to take the next train onward (or miss my connections), it turned up in the hands of a Belgian saviour who was most surprised to find me flinging my arms around him in relief!
The next trauma came after successfully negotiating the Moscow metro with my considerable luggage, a task I had been dreading. On boarding the Trans Manchurian Not So Express it transpired that the details on my train ticket did not match up with those in my passport. This elicited over twenty minutes of doom, gloom and headshaking from the dour moustaschioed provodnick (carriage attendant) while I sniffled pathetically at his side, but thankfully he eventually decided to brusquely wave me on.
The journey was a completely different experience from the one I took three years ago. This time the Russian steppes were deep in snow and reminiscent of scenes from Doctor Zhivago, but without the starving Russian peasants chasing after the train. However, inside the carriages the temperatures were more tropical than arctic, and the well prepared Russians promptly changed into shorts or jogging pants. It was slightly surreal to be sweltering in temperatures such as recorded below when there was snyet and lyot (snow and ice) flashing past the window.

Whereas last time I was in a carriage full of westerners, this time I spent the whole trip across Russia struggling to communicate with the help of a phrase book – but at least my Russian vocabulary now extends beyond ‘vodka’, even if is only to say ‘ Ya nye gavaryu paruski’ (I don’t speak Russian). I started off sharing a compartment with three Russian men, one of whom drank himself into a stupor on the first day, during which time he also rather worryingly staggered off and disappeared for about three hours. Just when I thought he must have fallen off the train and be a frozen corpse by the side of the track, he reappeared, slightly more sober but still clutching a bottle of beer. But by the end of the trip I had the luxury of a carriage to myself. Below are Svetlana, Irina, Tatiana and Mariana, the jolly ladies next door who invited me over for vodka and Russian sausage, and took me under their wing at the Chinese border stop, when I joined them in town to become of the ‘babuschkas that lunch’ brigade. 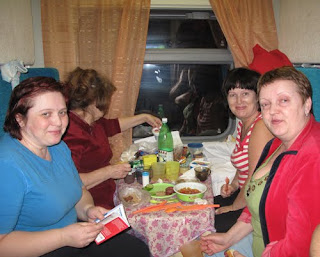 Passing Lake Baikal was an eagerly awaited thrill, as instead of a blue expanse of water fringed with ripples and dotted with little fishing boats, the whole lake was completely frozen solid. But people were still fishing through holes in the ice, huddled under windbreaks – some had driven their 4x4 vehicles miles out onto the lake. 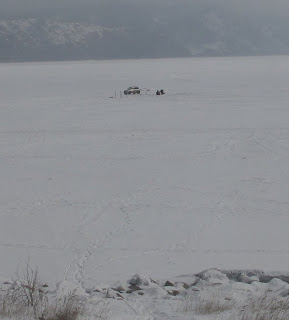 I am now staying with friends David and Caroline in their superb flat in central Beijing – it was utter bliss to have a hot shower and cup of tea on arriving (which to have first?) and crash out in a comfortable bed. Yesterday I went with Harry Tse and Peng Wenchao for a most congenial meeting with the Chinese Association for Friendship with Foreign Countries to report on our progress, and this morning Peng helped me sort out a super duper new dongle for my laptop.

After a period of hibernation over the winter, things are now moving rapidly. In the last couple of weeks I have been on excellent courses for Expedition filming http://www.explorersfilmschool.com/ , GPS http://www.gpstraining.co.uk/ and Wilderness Medicine http://www.wildernessmedicaltraining.co.uk/ - the latter held at the Royal Geographical Society and accompanied by the sound of crashing chairs and running footsteps as people fainted or exited the room during slides of the ghastly wounds we will apparently expect to encounter on our travels.

I will be leaving for China next Wednesday March 17th - my ticket on the Trans Siberian or rather Trans Manchurian is booked and paid for - after the stresses of last minute preparations, I will undoubtedly be found collapsed with a bottle of Russian beer clutched in my hand once I am safely onboard. I may not be able to communicate by e-mail until I arrive in Beijing on March 26th, and I will have to content myself with staring at arrays of silver birch for a week.

After a few days of arrangements in Beijing we will head out west to Jiayuguan, and set out along the northern silk route across the Gobi desert, oasis hopping where possible. Stalwart Peng Wenchao is still a core team member, and cousin Rowena is joining us for the first few weeks.

I intend to retrace the steps of Mildred Cable and Eva & Francesca French, intrepid British missionaries who crossed the Gobi desert five times in mule carts in the 1920s and 30s - they were the first British women to do so. They wrote several accounts of their experiences travelling across the desert from oasis to oasis. My father gave me their book 'The Gobi Desert' when I was eighteen, and I was immediately entranced with their descriptions of scrapes with bandits and moonlit journeys through deserted landscapes littered with ruins of old towns and the bones of the unfortunate. I have always harboured a secret ambition to emulate them (in travelling not evangelising) and now find I am in a position to do so. I have also been in contact with Linda Benson, who has written an excellent and well researched biography of the Trio - 'Across China's Gobi', and with Kate James, who followed their trail by bus and train and has written a most entertaining account of her journey 'Women of the Gobi'. All these books are available on Amazon for those who are interested.

On the media front there has been a steady coverage of the ride - for the equestrians among you, there should be a report in Horse and Hound in the near future. I was interviewed some time ago for the new FEI Focus magazine produced by the International Equestrian Federation, who are responsible for equestrian events at the Olympics, but have only just discovered the resultant article in the October issue. It can be accessed in pdf format on the FEI website http://www.horsesport.org/ Look at page 41 in the pdf version of the October issue of FEI Focus.
Posted by Megan Lewis at 20:03 2 comments:

In 2009 we were extremely fortunate to be sponsored a trailer by the Jiazhuo company. It was indispensable for carrying vital supplies of fodder, hard feed and water for our hardworking horses, particularly in the desert areas we crossed, and for transporting them in emergencies - the low ramp made it easy to load them at the side of the road. The trailer also had many other advantages. We were able to leave the horses tied safely to it while we used the unhitched jeep to drive on errands. A little kitchen at the front allowed Peng and Li May to fry up noodles or other delicacies for lunch. The solar powered plug point was immensely useful for charging all our electrical equipment, and meant I could get on the internet even if we were in the middle of nowhere.
The pull out canopy was a luxury in the August heat, and the photo below shows us relaxing in comfort at a rest stop somewhere in the middle of the Inner Mongolian grasslands. The tethering rope is attached to a horse at the other end - as long as we had one or two of them tethered, we could leave the others loose to graze. 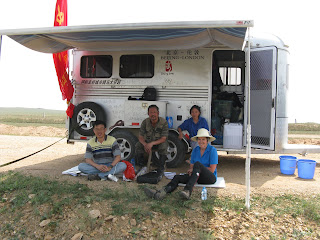 However I have had a concern that the jeep and trailer would not cope with the rigours of the rougher terrain I expect to encounter further west in Xinjiang, particularly if we ride through more remote and scenic country.
I was therefore delighted to receive an e-mail from Wutzala to tell me that the Jiazhuo company have generously agreed to sponsor us a more suitable truck. I have sent my recommendations, and Peng is in charge of making sure the specifications are as we would wish!

...is not a happy one, particularly if one is being forced to pose with passing foreign devils. Me and Baotou policeman en route to the Huang He in September. 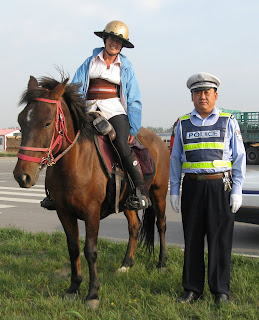 And below is Hua experiencing an even closer brush with the law while negotiating Baotou traffic.
I was so concerned with the narrow gap he was squeezing through, I never even noticed it was a police van until I looked at the photo later! 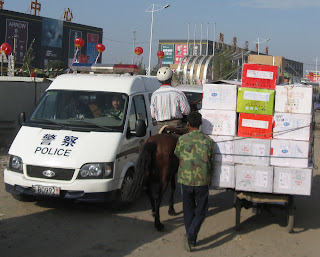 All aboard for Stinky Well ... 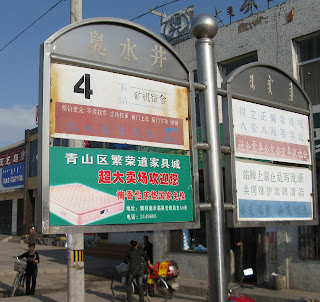 ....but I wonder how many people get off there? Here is the bus stop for that place with a pong, which caused Hua much hilarity.
Near Baotou, August 2009