A Driver at Last!

This morning I still did not have a driver for the back up lorry who could start at short notice, which meant a worrying delay to the start of this final leg.
In desperation I phoned the Jamie and Louise programme on Radio Wales http://www.bbc.co.uk/wales/radiowales/sites/jamieandlouise/ as I have been interviewed for the programme twice before. They enthusiastically helped me put out an urgent appeal, and as a result Michael Garman from near Carmarthen is setting off to Hungary with me first thing on Saturday morning!

Many thanks to Jamie and Louise and staff for their help, and also to Tommo on Radio Carmarthenshire, who put out another appeal which resulted in a potential driver for later on in the stage.

We should reach Hungary on Sunday evening, and then will collect the Shagya gelding Dallam on Monday morning en route for Tiszabecs on the Hungarian border with Ukraine. He is a 10 year old who was only gelded a couple of years ago, and has been mainly used for showjumping. Below is a thumbnail photo of him in action, which is the best I have of him at the moment!

The Long Horse Ride blog has been included in the Monster 50 top UK pet and animal blogs by Monster Pet Supplies http://blog.monsterpetsupplies.co.uk/themonster50/
Posted by Megan Lewis at 18:10 1 comment:

The Next Big Thing!

In January, daughter Iona, singing and playing her electric harp, qualified for the semi-finals of 'The Next Big Thing'. This is a talent competition run by International Confex, a major exhibition for the events industry http://www.international-confex.com/. Last week I became an elderly roadie when I carted all her kit up to the Excel exhibition centre in London!
There was great excitement on Tuesday when she got through to the finals, but even more on Thursday when she actually won the whole competition! She receives £1000 to spend on her mother, a stand at next year's Confex, and a contract with events agency Sternberg-Clarke http://www.sternbergclarke.co.uk/
Here she is getting her mitts on the obligatory bottle of champagne presented by the compere ... 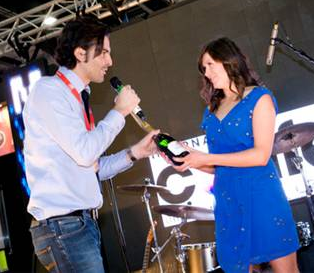 Been a bit quiet again as I have had trouble accessing my blog, but the good news is that we are in the EU!!

I had to make yet more corrections to the EU paperwork before I could leave Ukraine, but I eventually was able to load up my remaining horse on the afternoon of Wednesday February 22nd and set off for the border. Predictably it was not all plain sailing in Ukrainian customs as had been promised, but Natalya came to my rescue on the mobile, and eventually everything was sorted out and stamped and I was allowed through to face the Hungarians. What a relief when I finally drove out into the dark of the Hungarian countryside at around 4.00 am in the morning!! 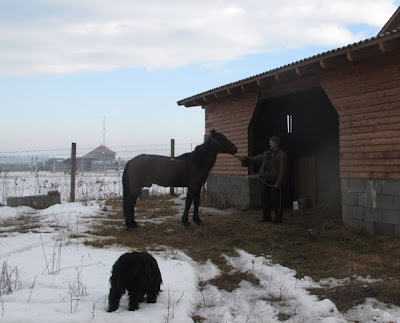 The little Kazakh stallion is now in his isolation stable near Mateszalka, courtesy of Dr Ungvari Zsigmond, who has been most kind and helpful, letting me use the warm and comfortable holiday bungalow on his riding centre/stud. Here he is with some of the family which seems to consist almost entirely of medical doctors. 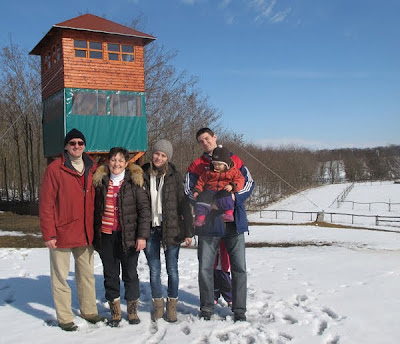 The vet came to blood test the little horse on Saturday, and his new Hungarian passport is being prepared - this should take about 5 weeks.
Then it was off to stay at the Hungarian national Shagya arabian stud at Babolna while I was looking for a replacement horse. The stud at Babolna was set up in 1789 to breed remounts for the Austria- Hungarian army, and it soon came to concentrate on the exclusive use of desert and purebred arabian sires to produce what became the famous Shagya arabian, which is a distinct breed in its own right. They were developed both as riding and carriage horses, and are larger and stronger in physical type than the purebred arabian.
The stud is focused round a lovely old complex of buildings - mainly comprising a large courtyard at the centre of which is an indoor riding school and an elderly but comfortable hotel - very reasonable rates and it is superb to be able to walk straight out the front door and into the stallion block!
A stallion being led from the riding school back to the stallion block .....
. 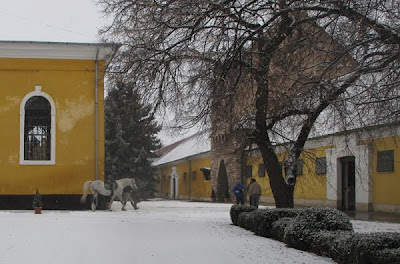 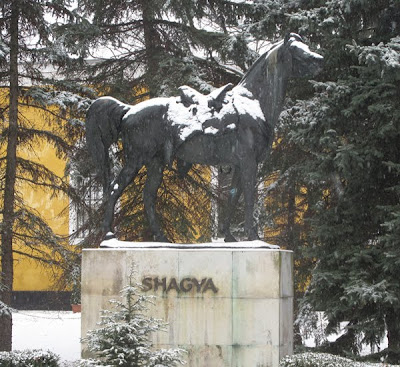 One of the stunning Shagya stallions in his loose box. This is Gazal XXI. 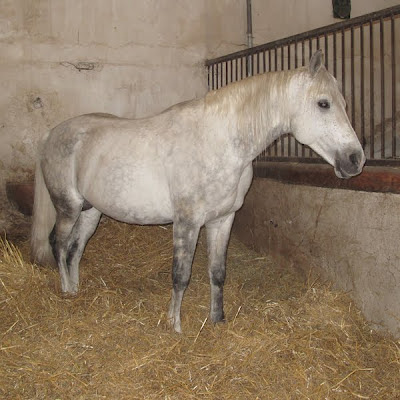 Rather confusingly for the uninitiated for whom maths is not a strong point, the stallions at Babolna are mainly named after the stallion line they originate from, with a personal number attached. As can be seen from the sign below, Gazal XXI is mainly descended from Gazal and Shagya lines. 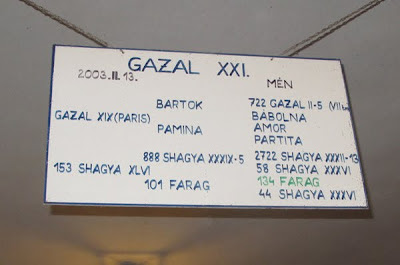 Mares and foals in the barn at the mare and foal unit... 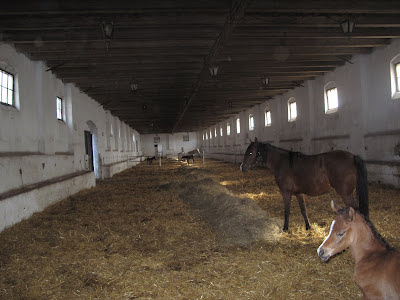 There were a couple of very suitable horses for sale at the stud, but unfortunately a little beyond my budget. However I managed to identify a few promising Shagya arabians from the website www.lovasok.hu and on Wednesday drove across the country to see two of the most likely candidates. The upshot is that I have bought Zahira, a 7 year old ride and drive Shagya mare. She is a lovely stamp of a mare, if not top show quality.  Her elderly owner has recently had an operation and is unable to use her - she seems very sweet tempered and it was evident that she was very much a member of the family. Here she is with her breeder, very much in the rough as she has been turned away since August..... 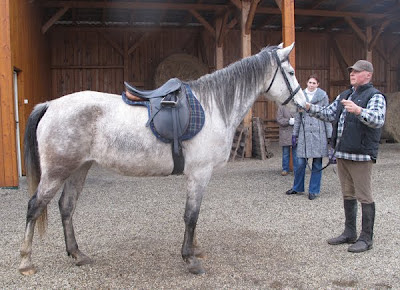 But she was duly lunged and ridden with no problems, and I was able to have a little potter around on her back. I am arranging for her to be covered by an old Shagya stallion they have on the stud.
I am also negotiating for a 10 year Shagya gelding who has been used mainly for show jumping - I will include a photo if I actually buy him!
Early the next morning I set off for home in the lorry, and am now back in the Land of My Fathers, and hope to drive back out to Hungary to set off again in a couple of weeks time.
I am desperately looking for a volunteeer driver for the support lorry if you or anyone you know is interested. For a couple of weeks or more from mid March to July. Must have a Class C category driving licence, but if you have been driving for more than 10 years you automatically will. Bring your own sleeping bag.
Contact me at megancwrtycadno@hotmail.co.uk for details or to sign up!
Posted by Megan Lewis at 14:46 2 comments: