I suppose I had better share the link to this rather cringeful, for me at least, S4C interview in Welsh on Heno - it is the first feature in Episode 140 which is showing for about a month.

The double chin strikes again, not to mention the sack of potatoes cantering around in the background behind the presenter.  Iona placed it in ten top 10 cringe moments of her life, though I thought she aquitted herself valiantly.  As Gwenny commented on Facebook   'Dwy'n falch iawn o chi Iona. Rwyt ti 'di wneud rywbeth arbennig ac rwy'n credu dy fod ti'n rhyfeddol'

But I was riveted to the film footage which we took of the ride itself as it the first time I have seen it.  I never rewound to view at the time as I was so terrified of taping over or losing stuff we had filmed!  I handed all my tapes over to S4C to use and put on CD, so hopefully I will soon be able to see the rest.

For anyone who has access to Welsh TV and is interested in witnessing my pathetic attempts to conduct an interview in Welsh, I have just had a phone message from Welsh TV channel S4C to say the feature about the ride will be on Heno this evening.  Unfortunately or perhaps fortunately I will be up in London at lecture/dinner at the RGS so will miss it.
Posted by Megan Lewis at 11:16 No comments:

From a Chinese Dragon to a Welsh dragon.

Suddenly realised to my horror that in all the excitement of completing the last leg of my ride nearly two weeks ago, I totally forgot to bring my blog up to date, though I have sent out a newsletter and face-booked - see http://www.facebook.com/home.php#!/groups/100069313746/.

So if you are not already aware, on Wednesday September 17th I reached my final destination of Worm's Head at the end of the Gower Peninsula in Wales, having ridden all the way from Old Dragon's Head at the eastern end of the Great Wall in China, shown below.......... 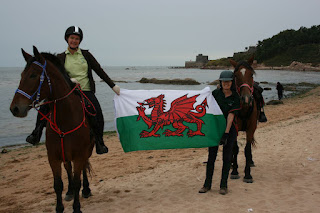 Worm in this context is the old English for a serpent or dragon, which means I have ridden from a Dragon's Head on the Chinese coast to one on the Welsh coast!  This destination had particular resonance for me as my mother's side of the family (Knoyle) originate from Swansea/Gower.   Incredible to think that it is four years ago this coming Thursday that I originally set out from Shanhaiguan bright eyed and bushy tailed with no conception of the many challenges that lay ahead.  A lot of water has passed under the bridge since then.

Thanks go to Anthony Frost of Welsh Cottage cakes www.welshcottagecakes.co.uk  who has not only sponsored my mount Zorbee, but welcomed me to coffee and sandwiches at the factory in Llandeilo on my way through on Monday. 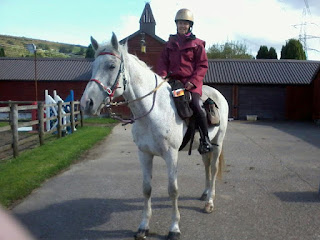 Thanks also to Sherry Wilson and Rowena Moyse for kindly stabling Zorbee free of charge en route, Lisa Williams for watering me and Zorbee in Pontardulais (see photo above), and neighbours David and Theresa Ford for fetching us home.

We arrived at Worm's Head on a glorious afternoon after a breezy ride across Gower - I had forgotten how stunning the views are along Rhossili Bay.  A photographer from the Western Mail was waiting and Zorbee and I spent about an hour posing for photos.....

Worm's Head seems to be a prime spot for overseas visitors, and I was able to flabbergast a group of Chinese tourists from Beijing by telling them (in Chinese of course!) that I had just ridden all the way from their home town.  A pity I forgot my Chinese flag.

I have had quite a few requests for talks, and on Saturday I gave my first one to a group of most receptive guinea pigs at Rowena Moyse's carriage driving centre near Gowerton http://www.rowena-moyse.com/

On the way down to Gower I was interviewed by Swansea Sound, and last Friday S4C sent reporter and film cameraman over to our home Ffrwdfal to interview and film me for 'Heno'. Heno is on every weekday at 7.00pm and the feature may be shown this evening, or failing that in the near future.  A bit daunting trying to answer questions in my horrendously rusty Welsh, since I have been trying to concentrate on speaking Chinese and Russian during the last few years! I just hope none of my former Welsh teachers will be watching.
Posted by Megan Lewis at 16:45 1 comment: