Sistine Chapel Chimney Cam has to be the Roman Catholic equivalent of watching paint dry.
http://news.uk.msn.com/pope-election/

10.44 a.m. Wednesday. Breaking News :-  The Pope has NOT been chosen. But apparently the smoke is not as black as yesterday.   Keep watching, folks! 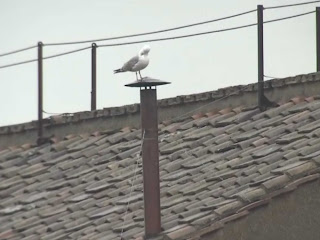 http://www.businessinsider.com/seagull-on-vatican-chimney-2013-3?utm_source=feedburner&utm_medium=feed&utm_campaign=Feed%3A+businessinsider+%28Business+Insider%29
Posted by Megan Lewis at 10:10 No comments:

And while you are at it, look further on in the show at the film of One Direction visiting the Nairobi slums. This is 51.10 minutes into pt 3 of the show.
And also at Russell Brand in Kibera 3 years ago Comic Relief's Big Chat with Graham Norton (at 1:33.48).

This should help to remind you that our beneficiary charity ChallengeAid raises money to help educate children in the Nairobi slums exactly like those portrayed in the films above.   And the joy of donating to this charity is that ALL the money raised goes directly to the projects supported - NONE goes to administration, which is covered by separate sponsorship.

Click on the following link to see a DVD about the work done by ChallegeAid (formerly Schoolchildren For Children) in Korogocho and Kibera.  http://www.youtube.com/watch?v=V5w8vSjKg5g

If you would like to donate to this extremely worthy cause, you can do so via my The Long Horse Ride Justgiving page at  http://www.justgiving.com/meganlonghorseride/
Posted by Megan Lewis at 10:15 1 comment:


RAI, the Italian TV company responsible for the TV programme I took part in on Sunday, looked after me admirably during my Rome jaunt.  I was ferried between airport, hotel and studio by chaffeur driven Mercedes, and they had arranged bed, breakfast and dinner for two nights at the comfortable Donna Laura Palace   www.donnalaurapalace.it  by the Tiber. My room was one of the ones on the third floor with a balcony. 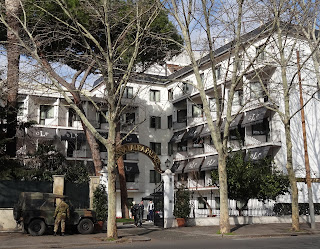 But I was a trifle disappointed to find that the military guard they appeared to have provided for me at the gate (see photo) was in fact for a More Important Person staying at the hotel.
I managed to snatch a few hours to do a whistle stop tour of some of the sights in between TV arrangements.
So here I am on the obligatory visit to St Peter's Square and Basilica, coinciding with an exciting time for the Vatican following the resignation of Pope Benedict XVI only three days before. 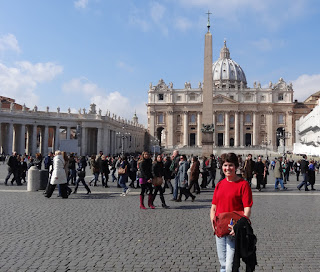 The reason I didn't actually make it inside the Basilica is evident just behind me - the enormous queue which trailed around the Square. Apparently it was exceptionally long due to the rush to beat the imminent papal conclave to elect a new pope.  It takes place in the Sistine Chapel which is closed while the cardinals deliberate, and can drag on for days before white smoke from the stove installed inside signals a result has been reached.
Then it was on to the Pont Sant'angelo, a characterful old bridge across the Tiber lined with fabulous sculptures of angels designed by Bernini and all carrying instruments of the Passion. The one to the right of the photo is the Angel of the Throne, the one on the left is rather ominously the Angel with the Whips. At the end of the bridge is the Castel Sant'angelo from which Tosca flung herself.  But what is that I see before me? A floating Indian fakir?  ........... 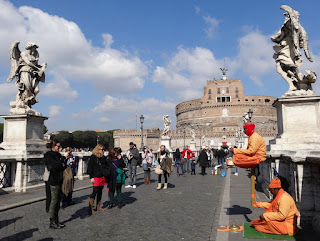 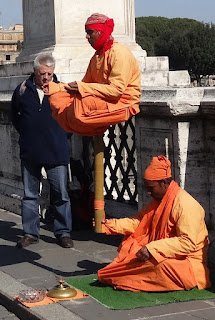 No trip to Rome would be complete without a visit to the Trevi Fountain ....... 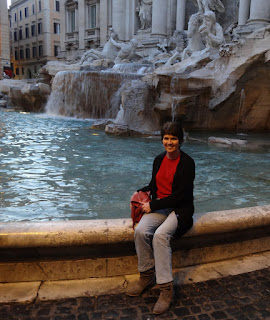 I may look lonesome, but in fact the steps in front of the fountain were heaving with tourists. The fountain is a nice little earner due to the numbers of people throwing coins into its waters to ensure their return to Rome. Whether three coins or more I know not, but allegedly it takes an average of 3000 euros a day, which tots up to a not inconsiderable million a year.

And on my last morning I just had time for another brief saunter, taking in a quick couple of Caravaggios and a horrendously expensive coffee at the Cafe Greco  http://www.anticocaffegreco.eu/index.php  where Casanova hung out (so it had to be done), before hanging out myself in true Grand Tour tradition on the Spanish Steps .... 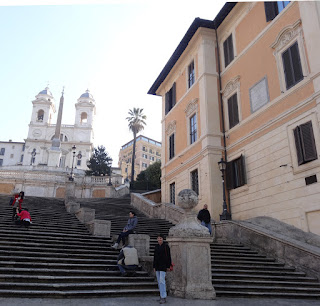 The building to the right of the Steps is the Keats-Shelley house.  Keats lived here for the last few months of his life after advice from his doctor to spend the winter in Italy. This is also where he succumbed in great suffering to tuberculosis in 1821 aged only 25, the last words to his friend Severn being "Don't breathe on me, it comes like ice" . The window of the bedroom where he died can just be seen top right, but perhaps not the window out of which he once famously emptied a bad meal. 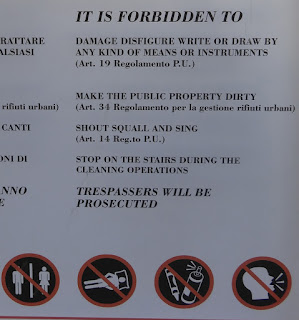 And yes I somehow managed to curb my urge to shout squall and sing or even fall asleep on the Steps, though it is difficult to understand how one can walk up and down them without trespassing. As to the meaning of the visual warning bottom left - are there any suggestions? - canoodling obligatory?

Roman centurions are clearly eager to keep up with the times, though it is  bit awkward to handle a mobile phone when you are already brandishing a sword........... 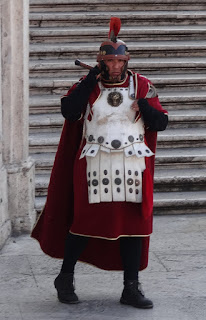 Family on the box

I have just come back from an all expenses paid weekend in Rome courtesy of Italian TV channel RAI 3 who flew me out to take part in the travel programme Alle Falde del Kilimangiaro. RAI is the Italian equivalent of the BBC, and RAI 3 is one of the three main Italian TV channels - not one of Berlusconi's I hasten to add!
There is a link to the programme below, and I feature about third of the way through - use the highlights bar on the right to jump to the exact spot.  I look a bit like a rabbit caught in headlights as it was rather distracting to cope with a brace of interpreters - Marco relaying presenter Licia Colo's questions in English via my earpiece, and Michaela loudly translating my answers into Italian over the studio sound system while I was in the process of talking.

As you can see, I got the full make-up treatment which was a new experience.  I was flown out British Airways and put up for two nights in a lovely hotel by the Tiber - it also gave me the chance to do a little sight-seeing, but more of that later. 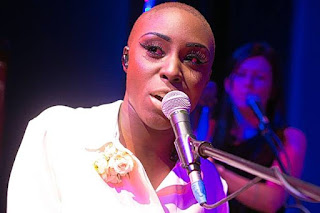 It seems to be a media packed week for the family, as Iona and her 'butterfly wings' (as her harps were described in a recent article  http://www.standard.co.uk/goingout/music/laura-mvula-tabernacle--music-review-8520465.html ) will be supporting Laura Mvula on Comic Relief's Big Chat with Graham Norton.  Watch out for them on BBC3 on Thursday evening.
Just noticed you can see a ghostly Ions behind Laura in the photo from the article above.
Posted by Megan Lewis at 18:18 No comments: