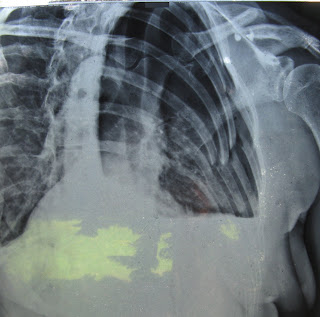 Just to prove I am not malingering, here is an X ray taken 2 days after I fell off! At top right you can see the two overlapping ends of the snapped clavicle, and below are the broken ribs, a few of which also completely snapped. My lung space is partly filled up with blood on the right hand side (due to puncture).

Things are improving slowly but surely and my ribs are much more comfortable. However my clavicle still feels rather unstable in spite of being pinned up 3 weeks ago. This has resulted in an overly inactive lifestyle which is very tedious for someone like myself - there is only so much day time telly one can stomach.

So What Did Happen the Day I Fell Off?

The problem with the lack of detailed maps in China is that it makes it difficult to venture far from the beaten track, and we have been invariably forced to follow the main roads. However, on the fateful Monday (27th April), we were leaving the hills behind us and nearing the flatter grasslands of Inner Mongolia. This also meant that we were able to get off the main road and ride along lovely little earth tracks to the side, occasionally passing through little rural villages. 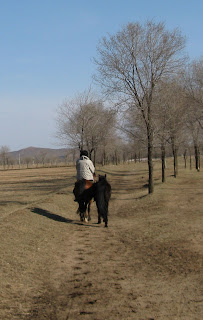 Above is Li Jing riding the thin horse and leading Hei Feng for the first time. 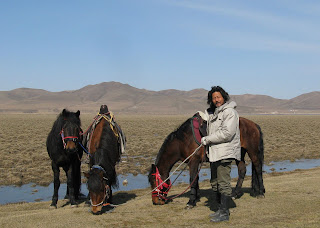 We passed a large area of marsh where a pair of lapwing were flying - here is Li Jing with the horses. Bajiu was having a lift in the trailer! 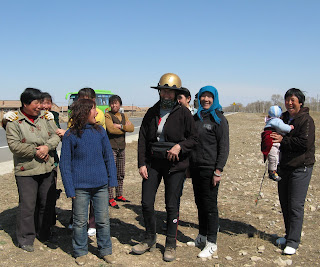 We stop for a rest roughly every 10 kms and are sometimes inspected by curious villagers. Here I am providing entertainment for some cheerful ladies in my guise as Mrs Darth Vader. They were particularly fascinated in playing guess the foreigner's age. 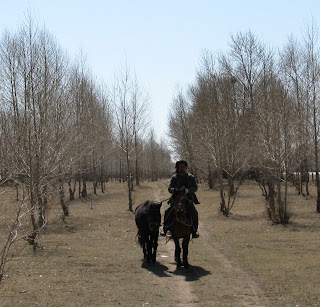 Below is the last photo I took of Zorbee about 15 minutes before I fell off - butter wouldn't melt in his mouth. 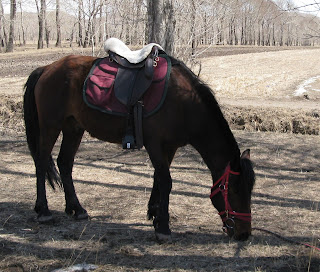 We had already covered about 20 miles and only had another 8 miles or so to go. I was too relaxed and not concentrating when Zorbee suddenly took fright and shot forward from beneath me - no doubt panicking more when I was taken by surprise and lost my balance. I was catapulted backwards onto my right shoulder and head. I have no recollection of hitting the deck, but suddenly realised to my surprise that I had not only fallen off and was on the ground, but had actually hurt myself - this is the first time in 50 years of riding that I have ever broken anything falling off a horse!
We carry a walkie-talkie, so Li Jing had summoned the 4x4 within minutes, and luckily we were just coming to a town with a hospital, so it was not long before I was being X rayed. It showed up the snapped collarbone (which I had realised) and broken ribs (which I had not), but not the punctured lung. So I decided as there was little that could actually be done, it would be better to brave the 7 hour drive back to Beijing where there was likely to be better medical care.
The horses were settled in a nearby racecourse before we set off. Back in Beijing I initially went to the SOS International clinic, and then on Wednesday to a Chinese hospital where they diagnosed my punctured lung, before ending up in the excellent Beijing Family Hospital once I was sure the insurance was sorted.
I also realised the day after that I had a tender patch on my head where I must have landed - I have no doubt that my injuries would have been far more serious, even fatal, if I had not been wearing my Charles Owen ProII helmet.

Well I have arrived home at last to recuperate for a month or so. The delay was caused by the fact that due to the punctured lung, this was the earliest I was allowed to fly home without medical escort bearing oxygen! I was gutted to be told by the doctors that I would need at least 3 months to recover, but I must admit that I am still feeling decidedly fragile. I had VIP treatment for the whole journey with wheelchair laid on at the airports at either end, and an upgrade to Club class on my British Airways flight. Thanks to all the cabin crew on flight BA038 for spoiling me rotten! Daughter Gwenny, who has just finished her finals, was waiting at Heathrow to drive me back to the depths of Wales. Here I was greeted by a house wrapped in scaffolding due to our depressing ongoing domestic saga of dry rot. Back to the daily grind!

However, it has been a relief to escape the tedium of watching interminable Z movies in my hotel room, punctuated by brief daily hobbles to the French patisserie on the other side of the Lido Park. My one excitement before leaving Beijing was dinner out at the wonderful Beijing restaurant Salt with Ed, Kath and David as a thank you for all their help - as it was just across the road, I did not have far to totter.

I have also had recent difficulty editing my blog as access currently appears to be blocked from China. It has been suggested that this may be because of the imminent anniversary of the democracy protests. Whatever the reason, hopefully this will be resolved by the time I return or I will have to work out an indirect way to update the blog when I am in China.
Posted by Megan Lewis at 12:08 No comments:

No Skiing in the Lake

Here is a photo of the Lido Park with my hotel the Rosedale in the background. This is where I go every day to shuffle round like an OAP. But you are one, I hear you cry. The lake is rather small and scummy, but has delusions of grandeur, if you look more closely at the notices around it. 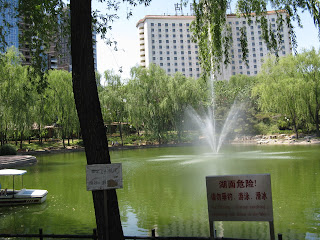 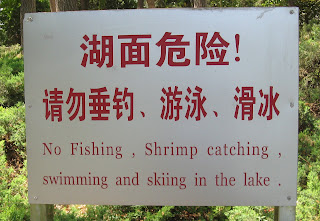 Assuming it is water skiing that is being referred to, one wonders how anyone could get up enough speed to be successful. Are the culprits suspected of using pedalo power?
I have now worked out my satnav route plotting system. To access it, go to http://www.thurayalocate.com/ Enter username Rowena Gulland, and password MeganLewis, then go to My Locations and open the map window. I have just plotted the location of the Rosedale hotel. My location was in fact about 50ft further west of the location shown on the map - I was sitting sedately in the hotel grounds, not cavorting on the roof. Remember this offset for future reference. 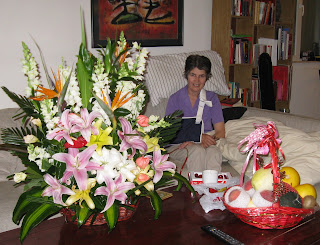 This is me recuperating in Ed Jocelyn's flat a couple of days after the accident and before I was admitted to Beijing United Family Hospital. Umpteen thanks to Ed for letting me move in while he was away, and to Kath Naday for sorting it all out at a time when I needed all the help I could get. As a couple of doctors commented, I look much better than my X rays demonstrated. The fabulous flowers and fruit are from well wishers including the Chinese Equestrian Association - and more arrived when I was in hospital! Many thanks to Wutzala, Kubi, Harry Tse, Xinlian and the rest of the crew.

You can see my right shoulder looks decidedly droopy due to snapped clavicle - it was a relief to get it pinned up a week later when the hospital/insurance had finally wrangled out whether I would be operated on in China or the UK. I was very well looked after before, during and after the op by the doctors and nurses at Beijing United, and would like to thank surgeon Dr Chen Hao Hui (surgeons can be called Dr in China) and his team for all their kindness.

The tube is draining blood from my punctured right lung into a little plastic box that had to follow me everywhere for a few days. The lung has been the biggest problem as it has meant I have not been allowed to fly home until receiving the all clear from doctors, insurance and airline - hence continual frustrating postponements. The latest is that as from next Tuesday I will no longer need a medic to accompany me on the flight with oxygen, so I can fly home then.

However my insurance company Sportscover Direct have been very helpful, and are paying for me to stay at the very comfortable Rosedale Hotel until I leave.

Unfortunately I have also been told I will need 2 - 3 months to recuperate which is a bit of a blow, but at least it will now give me time to sort out some things such as my satnav route plotting on Google, video clips, and the podcast facility on my voice recorder. For the moment, I have just worked out how to text to my Twitter profile, and will try to practise a bit before I am back on the road. My user name if you feel the urge to follow me is meganlewis49.

And at least I can type more easily now - will post more about the day of the accident later on, so keep on reading!
Posted by Megan Lewis at 11:48 No comments:

Had an op on wednesday to pin my snapped collarbone back together again. Hoping some of tubes (for antibiotics, painkillers etc) will come out today so can move around more freely. Unfortunately all this palaver means that my recuperation period will be longer than I originally anticipated - even more of a pain! Still difficult to type, so will end here.
Posted by Megan Lewis at 02:26 2 comments:

A minor setback has occurred in that on Monday I managed to fall off and snap my collar-bone, break 6 ribs and puncture a lung! However at least it means Li Jing now has no excuse not to go home and visit his family while I recuperate, which will hopefully be no longer than 3 - 4 weeks. As I am currently in hospital on one finger typing, I will leave more graphic details to a later post.
Posted by Megan Lewis at 14:58 4 comments: