The last couple of days to Shalkar have been increasingly sandy, but for the last twenty kilometres there was a rocky road through the dunes - slow going but better than sand which would have been tough on the horses and impassable for the truck. 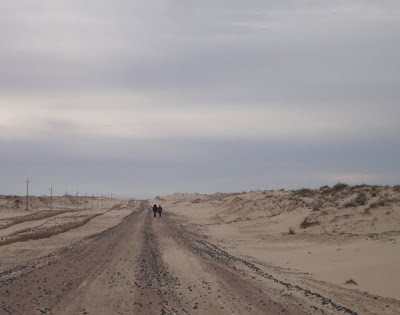 Unfortunately Bolashak has been very off colour, seems depressed, and is going slower and slower - we do not know if he is ill, or not coping with the work load. Rowena was reduced to Shank's pony for the last couple of days - leading him to conserve his energy. As she is taking the train home from Shalkar, we have decided to leave him in Shalkar to rest while I ride on to Embi. Baurzhan can then return to fetch him in the truck.

We have been very fortunate to find a place to keep the horses here with Zhanar's sister Bazargul. Here is Bolashak in his quarters for the next few days with bovine companion. 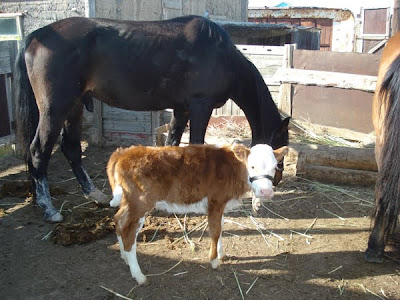 Today Bazargul treated us all to a traditional Kazakh beshbarmak. As the local English teacher, she has been most welcoming. 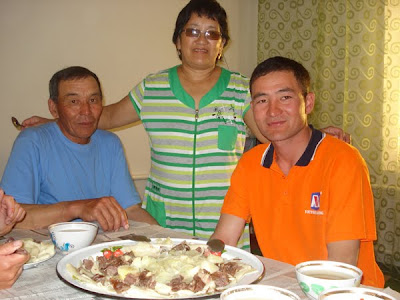 This was a vast improvement on the shashlik I ate last night at a local restaurant, which resulted in my spending the rest of the evening running back and forth emptying my guts in the long drop loo outside our hotel. However before the effects of the shashlik took hold, the evening was considerably enlivened for me at least by a somewhat inebriated aging lothario who repeatedly visited our table to declare his undying passion for Rowena, who seems to hold a fatal attraction for Kazakh men of mature years. No matter that she protested that she had a husband at home that she loved, we were treated to a graphic mime display to indicate that he would hang himself if she did not hand over her mobile phone number pronto.
This morning I was still feeling queasy, so it did not take much to decide to take a day off rather than set out for Embi. Although considering how ill I felt I have made a surprisingly quick recovery, which I can only put down to the Vidazorb probiotics I have been taking.
We have been staying here in a small hotel which has the luxury of a bathroom. However the pathetic trickle which passes for a shower is alternately scalding hot or freezing cold, and my ablutions were disturbed by banging on the door and the light being switched off. At times like this a bowl in a tent seems almost preferable.

April 24th . After leaving Aralsk on April 20th, we intended to follow the track along the railway line northwards. However we had a concern about sand covering the route which we had been warned about, particularly nearing the town of Shalkar. Deep sand would merely be tough going for the horses, but could result in the truck becoming stuck in the middle of nowhere. 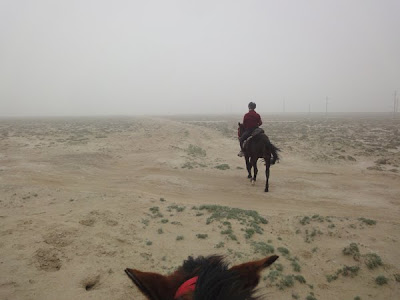 Arriving at the next town of Saksaul in a dust storm on the second day, Baurzhan got talking to a local lad who told us about an oil pipeline running roughly parallel to the railway with a good earth service track alongside. 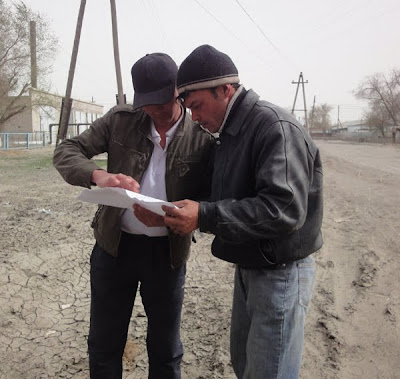 So that is what we have been following for the last few days. It has taken us across wild rolling steppe with the occasional low line of hills. 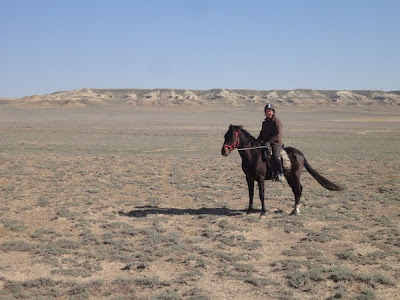 The pipeline is buried so there is nothing to spoil the scenery except the occasional kilometre marker with the distance marked in large characters facing skyward, presumably for the benefit of helicopter patrols. 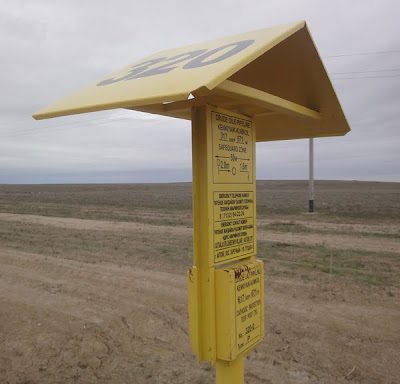 The track is strictly only open to pipeline officials and local traffic, but Baurzhan soon made firm friends with the pipeline security guards in their patrol jeeps - they were all were most intrigued and eager to help.


At regular intervals we encounter small herds of horses guarded by wiry steppe stallions who invariably gallop over to inspect us, but are usually easily shooed away. We put Bolashak behind Zorbee just in case his male ego gets too much for him. 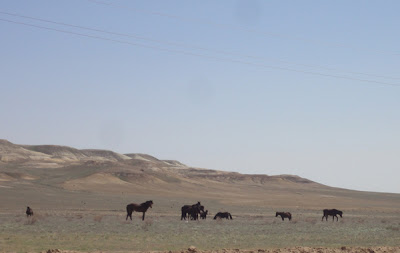 The situation is reversed when we come across camels, when I am glad Zorbee can hide behind Bolashak. 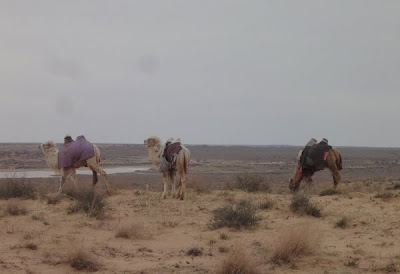 Baby camels with little coats on! 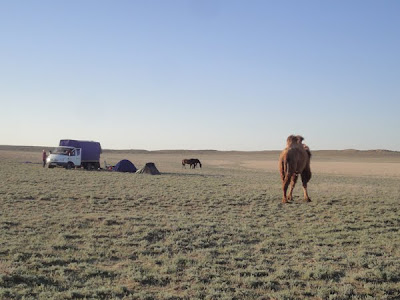 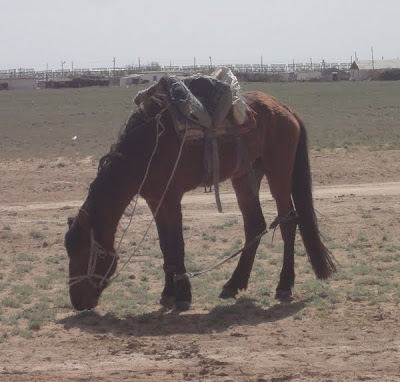 There are also occasional flocks of multicoloured sheep and goats grazing the steppe, always with attendant herder - here is herder's horse with three legged hobbles, outside one of the little railway villages we occasionally encounter.
Posted by Megan Lewis at 18:41 No comments:

Aralsk formerly used to lie on the Aral Sea, the dessication of which is recognised to be one of the world's worst ecological tragedies. The inland sea is fed by the Syr Darya and Amu Darya rivers (the ancient Jaxartes and Oxus) which flow from the south, but Soviet irrigation projects to divert water to grow cotton, particularly in what is now Uzbekistan, meant that by 2007 the sea had shrunk to a tenth of its original size and split into several smaller lakes. The ecosystem of the Aral Sea and its river deltas has nearly been destroyed by increased salinity, and the exposure of salt pans has resulted in dust storms and climate change
The shrinkage of the sea has resulted in the abandonement of fishing vessels above the waterline, and one of the main things Rowena and I wanted to do on reaching Aralsk was to visit the famous ship's graveyard at the former fishing port of Zhalanash. We were able to arrange a trip there through a local Aral development NGO Aral Tenizi, and this morning set off in a 4WD jeep for the 75km drive out over the dried up bed of the Aral Sea. Along for the ride was the very congenial Walter Kelle, a visiting German economist spending 3 weeks with the NGO in an advisory capacity, and a fellow inmate of the Aral Hotel. 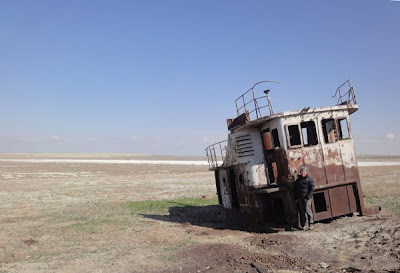 Very little is left of the ships - there were originally about eleven, but now there are only the rusting remains of about three, as they have been broken up for scrap metal. 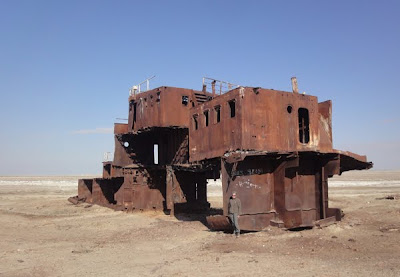 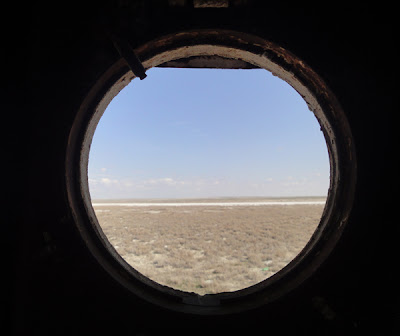 Due to the shrinkage and salinisation of the sea, the fishing industry has been decimated, though more recently an attempt to revive it has resulted in the introduction of salt water flounder - not with great success due to local resistance to eating an unfamiliar fish.


In 2005 a dam project was completed which has contained and raised the level of the North Aral Sea, although not to the extent hoped for as Aralsk is still high and dry. However, salinity levels have decreased and freshwater fish are beginning to repopulate the waters. It is expected that the flounder will disappear. Aral Tenizi is working to encourage new fishing cooperatives, and we visited one on the edge of the new sea. 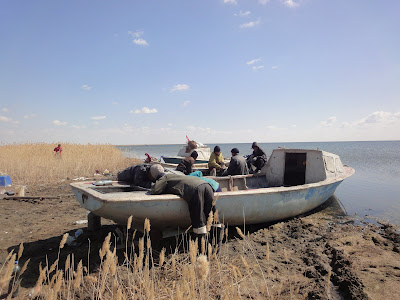 I was absolutely delighted on return to the hotel when Walter kindly offered my the use of the bathroom in his room - a luxurious suite compared to our rather bleak accomodation - where I was able to partake of a proper shower to set me up for the weeks ahead!
Posted by Megan Lewis at 06:27 No comments:

Stop Press. On Sunday May 22nd 2011, I rode across the bridge over the Ural river in Atyrau and into Europe, and on Monday May 30th I reached the Kazakhstan/Russia border. It has been difficult to update my blog from Kazakhstan due to restrictions on Blogger and limited internet access, but I will be attempting to do so over the next couple of weeks, so watch this space!
Posted by Megan Lewis at 06:21 No comments: