A belated Blwyddyn Newydd Dda, or Happy New Year for those unfamiliar with Welsh. My short term New Year's resolution is to get this year's Christmas decorations down before next Christmas, but perhaps I shouldn't bother as some of them are hanging around from 2013 in any case.  However, since arriving back in Wales in October 2015, I have managed to almost catch up with bills, paperwork and blog (here is the evidence!), sell a house, keep the ponies from succumbing to the horrendous wet weather, plan out a tentative route for this year and survive the inordinate amount of celebrating my offspring seem obliged to do over Christmas and New Year.  New Year's Eve party theme was 'Out of this World' - I went as a Black Hole and came downstairs to find the sitting and dining rooms completely wrapped up in tin foil.. 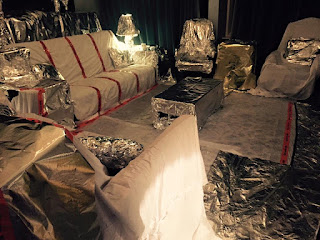 As we move into the new year 2016 I would also like to thank all the many people who helped and hosted me in both Canada and the USA during 2015.   I left Canada thinking that it would be difficult to equal the hospitality I received there, but was proved wrong.  It is a testament to the generosity of people from both countries that over the whole year I only spent two nights 'sleeping rough', though perfectly cosy in my sleeping bag.   I was taken into people's homes without question, on many occasions after I had just turned up on the doorstep with Lady in tow!

I am now in full swing preparing for this year's ride, and as you must have gathered by now, I intend to follow the Pony Express Trail. I have already been contacted by Petra Keller of the National Pony Express Association who sent me a digital file of most of the 2015 re-ride, and this has been invaluable in planning a more detailed route. To jog your memories, the NPEA run an annual re-ride following the original route between St Joseph and Sacramento as closely as possible.  An army of riders relay the mochila across country in around ten days, and it is now so well supported and organised that each rider only needs to cover a few miles.

Cousin Rowena will join the ride in the autumn when I plan to be riding from Salt Lake City to Sacramento.  This section includes extensive stretches of waterless desert in Utah and Nevada which will necessitate vehicle support to carry water and fodder. So I have been delighted that Californian rider Lucy Badenhoop (who has participated several times in the Pony Express re-ride) has kindly offered to provide this.  She will ride with us when possible.

Petra put me in touch with Samantha Szesciorska, who rode round Nevada on her mustang Sage in 2013 is planning another ride for 2016. Samantha was a fund of useful information including the novel idea of using a plastic bag to scare away wild stallions!  Pity I hadn't thought of that in Kazakhstan, though in fact the steppe stallions were not all that troublesome.   I have also had a couple of productive chats with Simon Casson who conceived and carried out a ride along the Outlaw Trail from the Mexican border to the Canadian border via Utah and Wyoming in 1999, and wrote a fascinating book about it with one of his co- riders Richard Adamson.  see 'Riding The Outlaw Trail' which is available on Amazon.

I feel it is now imperative to have a GPS to tackle some of the more remote sections of the trail further west, and last weekend went on a GPS training course (yet again!) courtesy of GPS Training who have long experience in introducing the uninitiated to the mysteries of mapping and navigating GPS routes. Trainer Andy Ayre has subsequently been very helpful in sorting out a unit with relevant USA maps for me, so hopefully it will help to prevent me going astray in the Utah/Nevada desert. I have no desire to emulate mountain man Jedediah Smith who narrowly escaped dying of thirst there during his 1826 crossing.
Posted by Megan Lewis at 23:56 No comments:

...but in the informational not physical sense as there has been quite a gap in my blog posts since I arrived in St Joseph in October.
On Thursday October 15th Patti and Kenny from Greenacres Riding Centre came to fetch Lady and take her back to Jamesport where she is spending the winter in a large sheltered field with equine buddies.  Then it was a round trip to Chicago by hire car to move all my excess baggage to store in Patti's garage at Jamesport, passing through Hannibal, Mark Twain's boyhood home town en route.
Thus an obligatory selfie with Tom Sawyer and Huckleberry Finn.. 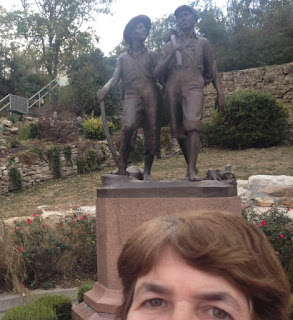 On Sunday I met up in St Joe (as we locals call St Joseph) with Lyle Ladner, the current President of the National Pony Express Association, though I was rather bleary-eyed after a night sleeping in the car.  He not only treated me to a slap up breakfast, but promised to help as much as he can. It is helping hands such as this that makes me feel following the Pony Express Trail is now feasible in spite of the private land and desert areas that I will need to negotiate.

Fortified by breakfast and encouragement, I spent the rest of the day looking round the Pony Express museum in the former Pony Express stable block, and the huge Pattee House museum just up the road, a former luxury hotel which housed the Pony Express office.
The Pony Express was founded by William Russell, Alexander Majors and William Waddell in 1860. Surprisingly in view of its iconic place in the history of the Opening up of the West, it only lasted for eighteen months, overtaken by the construction of a telegraph line to California by autumn  1861.
St Joseph was chosen as the eastern end of the trail since at the time it was also the westernmost terminal of the railway. Mail bound for San Francisco arrived by train, was delivered to the Pony Express office in Pattee House and was then carried by Pony Express for 2000 miles across prairies, mountain ranges and deserts to Sacramento, passing through Salt Lake City en route.   Each rider covered about hundred miles between 'home stations', changing horses at smaller 'swing' stations positioned every 12-15 miles or so. The whole ride took about ten days, amazing when you consider it will conservatively take me around four or five months!  Apart from riding all day and night through baking summer heat and biting winter cold, not to mention tackling rivers in flood,  and deep snow in the mountains, the riders occasionally had to escape attacks by Paiute Indians.
A life size tableau of a pony express rider about to leave the stables.... 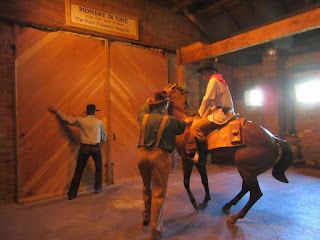 ..a bit too spookily realistic for me - don't think I will be emulating Ben Stiller's  'Night at the Museum'.
From here the rider would pick up the mail from the Pony Express office in Patee House and gallop down to board the ferry across the Missouri river.
An exact replica of the mochila which was used to carry the mail.... 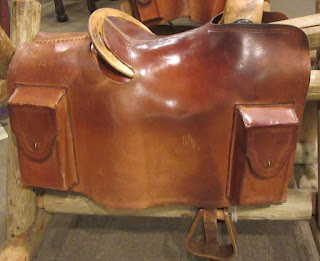 ...this is a removable leather cover which in Pony Express days fitted over a specially designed lightweight saddle - if you look closely you can see the cantle and horn of the saddle poking through slits in the mochila.  Four lockable pockets or cantinas contained the mail. Three pockets carried mail for the whole distance, and only the station keepers at either end of the trail held a key. The fourth pocket which was at the front left hand side (thus not visible in the photo) was called a 'way pocket'  and was used for mail being picked up from or delivered to home stations - only the home station masters held keys.
At each station the mochila was rapidly removed from the exhausted horse and flung over the saddle of the fresh horse before the rider jumped on and galloped on his way. 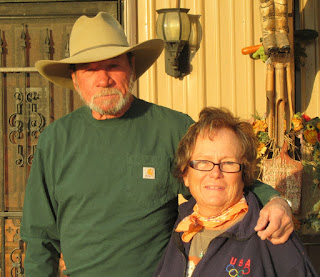 Leaving Lady in Patti and Kenny's capable hands, I drove back to Chicago to spend my last evening in the USA having a Mexican meal out with the Crown Point 'girls' ... 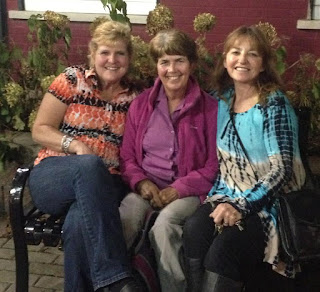 L to R, Debbie who hosted me before I started out from Crown Point, me, Pat who looked after Lady over the summer, and last but not least Carol, who is behind the camera.
Many thanks to the public spirited Debbie for putting me up or rather putting up with me overnight, particularly as she was in right in the middle of moving house. What teenage fun to have a sleepover with Debbie, me and the dogs all piled on a mattress on the floor in the empty living room!
And all the best in your lovely new home!
Posted by Megan Lewis at 20:32 No comments: