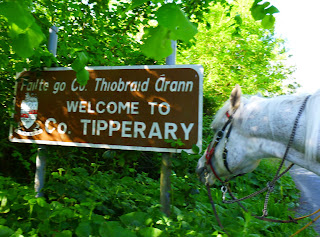 ......... you've guessed it, Tipperary, where the horses are currently staying at the Cahir Equestrian Centre.

But before leaving Kilkenny we boxed a refreshed Zorbee back to Mullinavat and I rode over the hill back to Lorraine's, meeting Julia en route for a photo session by the nearby falls - Julia's turn to pose..... 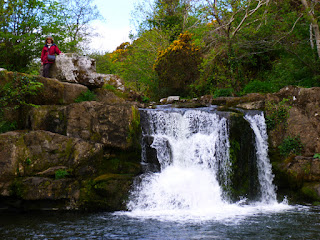 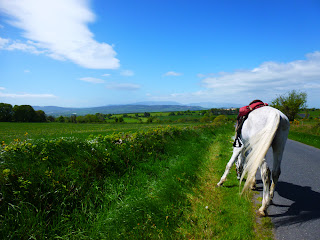 ......followed by an evening preprandial by the dung heap with Lorraine and sidekick Wallace the chocolate Labrador ............... 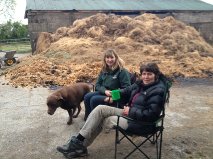 To be fair, in the other direction there was a stunning view of the Comeragh mountains.
Lorraine looked after us like royalty for the two nights we imposed ourselves on her due to Zorbee's squits - a huge grassy field for the horses, showers and pizza supper for us.

The team (almost) ready for off the next morning - right to left a studious Julia still deep in her thesis, Lili, Lorraine, an irrepressible Wallace and an impatient Zorbee. 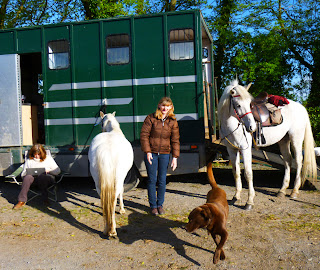 Next stop was Clonmel in Tipperary, where yet another enormous grassy field awaited at Daverne's Equestrian Centre - courtesy of Mark Daverne (Thanks Mark, and also to Trevor English who sorted it out when he was unable to accommodate us due to coughing ponies at his yard).   With all this rich grass, Lili is rapidly getting fatter so I will have to watch her weight - in these circumstances small ponies are susceptible to a condition called laminitis which causes inflammation and pain in the hooves.
Clonmel is also the home of Magners/Bulmers cider, so it was imperative that we sampled the local offering...... 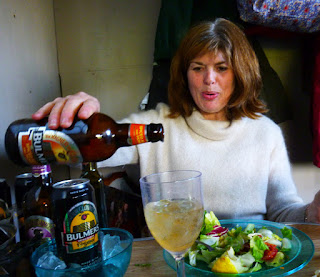 Highly recommended is the Apple and Rhubarb cider, to be drunk on ice - delicious!

Today it was a short ride to the Equestrian Centre at Cahir owned by Fiona Hyland.  While the horses relaxed this afternoon in a safe little paddock (thankfully not too much grass for Lili!) Julia and I had a jaunt into town.  Unfortunately not enough time to go round the impressive looking castle, but there was plenty else to amuse us ...
Sign outside the Cahir pub 'Mary Condon'.  Is the Guiness really that lethal here? 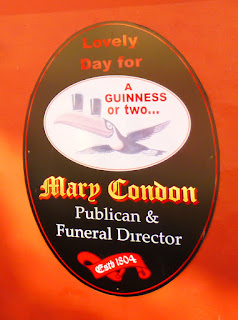 Burial spot - on the main street !!  - of warhorse Crimean Bob. 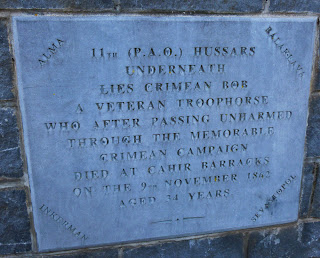 Cwtching up to the blind piper of Cahir 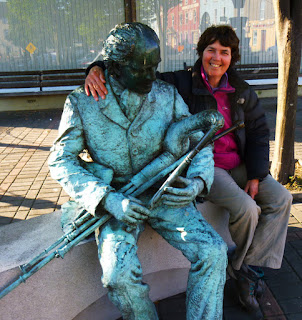 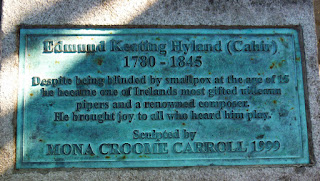 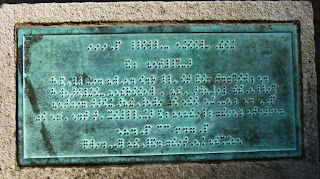 Took the overnight ferry over to Ireland early in the morning of Friday May 17th. Friend Julia Harper is along to drive, and I have also brought my little Section B mare Cwrtycadno Lili Wen Fach (Lili for short) along as company for Zorbee.  Besides cabin with ensuite shower, the freight passage included a full breakfast in the truckers canteen with the other lorry drivers, all of whom were considerably more burly than Julia and me!

Obligatory photo with rather woolly Zorbee overlooking Rosslare harbour before setting off to Ballyhealy near Kilmore Quay. The ferry we came over on is in the background. 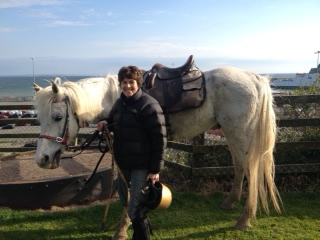 Then an amazing ride between sanddunes, sea and bird festooned lagoon on the stunning coastline en route.  It seems to be a popular place to exercise sport horses - for a while I joined up with the chatty Jimmy who was excercising a very fit looking eventer - I circumspectly continued to plod quietly along when he cantered off over the horizon.
That evening the horses were happily esconsed in an abandoned grassy outdoor school at Ballyhealy house courtesy of Betty Maher-Caulfield, who was away in Central Asia, while Julia and me ventured out to the little fishing harbour of Kilmore Quay and treated ourselves to a delicious fishy meal at the Silver Fox seafood restaurant.

Next day dawned cool and breezy, and we had an uneventful tramp through Wexford lanes to our next stop at Horetown House, where David Young runs a very neat and organised riding and polocrosse centre.
Thank you David for providing the horses with a huge grassy field for the night. 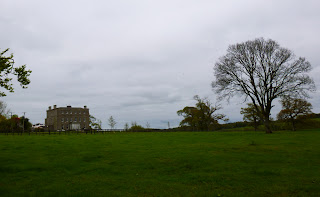 The main house shown above was sold on by his family and is now run as a boutique Irish country house hotel, where Julia and I settled ourselves in front of the fire in the basement bar for Irish drinks that evening.......... 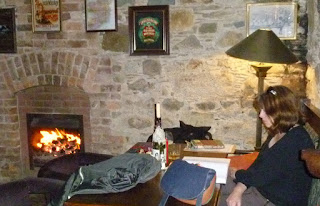 Julia looks rather glum but is in fact deep in concentration preparing for the viva for her PhD thesis at the beginning of June!

Happily the sign below is not at all typical of  Irish hospitality, which has been overwhelming. 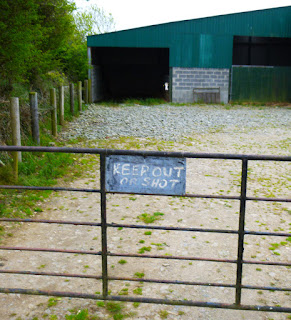 En route to New Ross the next day I was invited in for coffee and biscuits by the delightful Moira Molloy, shown below in front of her pretty cottage.  The feet belong to camera shy Stephen Kinsella who patiently held Zorbee for me while I was entertained inside. 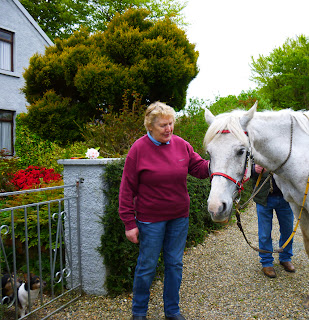 At the Oldcourt Stables we had an Irish welcome from Paddy Kent, a great character with the gift of the gab whose family are descended from Viking immigrants and have lived in the area for generations.  Zorbee and Lili had stables while we had the use of the holiday cottage, and Paddy whisked us off to see the 'Kennedy house' where American President John Kennedy's great grandfather was born - here is Julia in front of the house, which is not the substantial building in the background, but the little tin-roofed shed to the left! 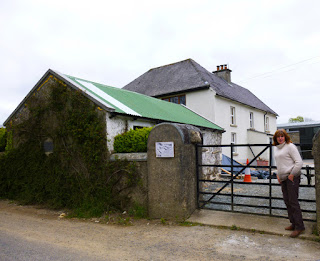 The plaque below commemorates the occasion on 27th June 1963 when JFK returned to his roots in New Ross - sadly we will miss the celebrations next month for the the fiftieth anniversary of the visit. 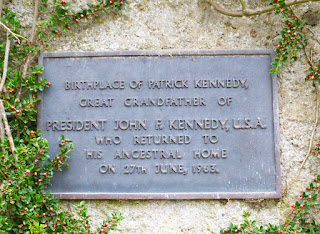 Julia and I ticked off another unmissable tourist attraction when we did the tour of the 'Famine Ship' on the New Ross quayside - a replica of the Dunbrody which was one of many ships carrying thousands of Irish immigrants fleeing the Irish potato famine to Canada and America in the mid 1800s.  The fever ridden passengers suffered appallingly in the cramped quarters below decks in spite of the ministrations of the captain - Welshman John Williams who apparently did his best to ease their situation.  Many thousands of Irish migrants died both during and after these voyages as unscrupulous shipping agencies crowded impoverished passengers on board. 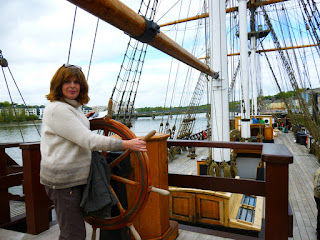 A Welshwoman at the wheel this time. 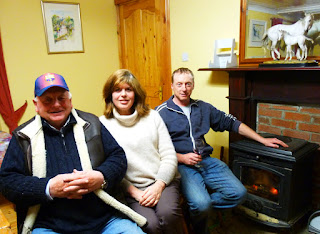 The ever effervescent Paddy Kent with Julia, and David who helps out during his spare time from a bank job - I don't mean in the criminal sense.

Curious cattle en route to Mullinavat from New Ross on Monday - Mullinavat is behind the hill in the distance. 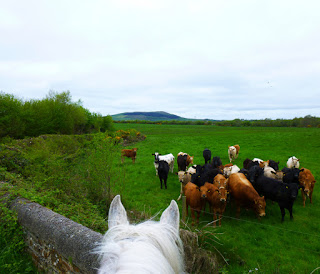 Julia managed to find a lovely field by a river for the horses in Mullinavat for the night, but unfortunately yesterday morning I found Zorbee scouring badly - no doubt the side effect of a worm dose I had administered the evening before.  He was rather down in the mouth, so we decided to take a day off and box him on to our next stop with Lorraine Scott of the Whitechurch Stables near Carrick on Suir where the facilities are more suitable - we will box him back to Mullinavat when he is OK.
So here we are in Carrick on Suir - and while Zorbee is recovering in a large grassy field, Julia and I have taken the chance to do some sightseeing....... Suir is rather unfortunately pronounced Sewer, though happily it most certainly does not live down to its name! 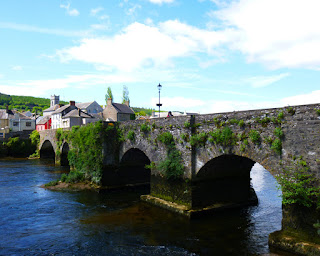 Julia on the fifteenth century bridge in Carrick - she is the pimple to the right of the lamp-post.  This was also the scene of a terrible accident in 1799 when a barge crashed into the bridge during a heavy flood and over a hundred  people, mainly women and children, were drowned.
And below in front of the beautifully restored Ormond Castle - a stunning example of an Elizabethan manor house, attached to the ruins of an older castle at the back - it looks rather forbidding and bleak here, but was in fact must have been an imposing but cosy home - the rooms were lovely. 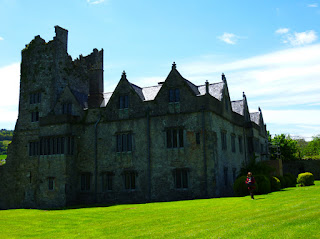 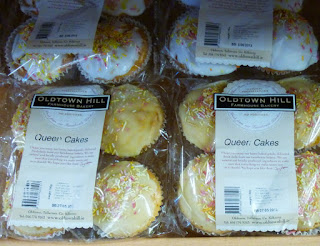 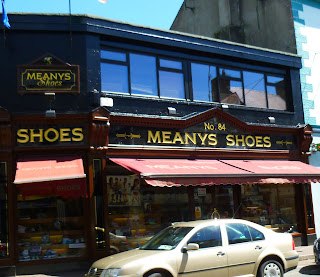 On Monday I set out on the three day ride from home to Fishguard to catch the ferry to Ireland.  This is because I intend to continue west and ride right across Eire to the westernmost mainland point of Britain at Slea Head on the Dingle peninsula. 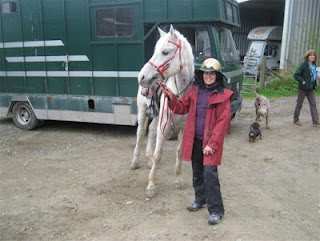 Here we are preparing to set out on the second day from the  Cross Foxes Stud where Zorbee  had very comfortable overnight hospitality courtesy of Davinia, Ben and David Bethell - he is still looking wistfully towards the stables.
Behind is the lorry, which we will be taking with us to transport the horses home etc and for accommodation. Friend Julia will be the trusty driver - you can just see her scooting across in the background of the photo.
My wet weather gear was a necessity for the damp day that followed, and even more so the next day when I crossed the Preseli mountains.  The weather forecast had promised improving conditions, but this did not appear to apply to the Preselis, and I fought my way over the bleak moorland against violent wind and driving rain - I could barely stand in places and it was without doubt the worst weather I have encountered the whole way across Eurasia!
It was thrilling to pass within yards of the famous Bluestones of Carn Menyn, which reared up eerie and primeval in the low cloud - they are thought to be the source of the bluestones of Stonehenge many miles away.  It was impossible to even think about taking a photo as I struggled through the gale and wet, but here is what they look like in calmer times!.......

Long experience of negotiating Welsh bogs over the years enabled me to pick my way through the wet patches on the top without mishap, but it was only when I got down the other side that the sun appeared, and by the time I reached Fishguard it was positively balmy. 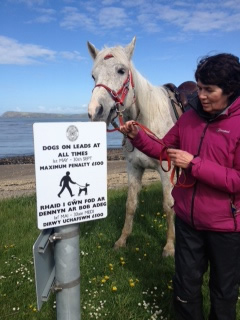 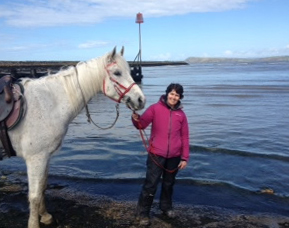