After arriving home on November 6th I was confined to barracks for over a week as I was unable to drive with my cast. On top of this my computer crashed so neither could I sort out my photos or catch up with my blog, even one-handed.  At least I had an excuse besides pleading exhaustion to lie in bed watching daytime television and reading.   But ten days after arriving home I emerged from my local hospital in Carmarthen with a funky new cast for which I was able to choose the colour.  What did I choose you may ask?  As I was about to attend one of my social occasions of the year it had to be black to match my little black dress.  This was for a do in Cardiff in aid of my beneficiary charity Challenge Aid founded and run by husband Iestyn. So here I am glammed up on top table next to Iestyn (white shirt and dark jacket).. 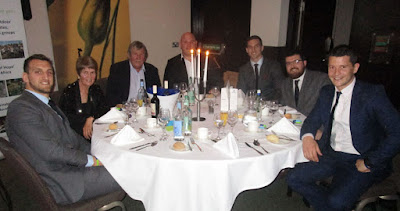 ..the guy in beard and glasses is son Gethin and the other gentlemen L to R are Welsh rugby internationals Sam Warburton, Craig Quinell and George North, and on the far right rugby journalist Rhodri Gomer Davies who is the son of one of my oldest friends.

Through fitness promoting challenges, the charity raises money to take children out of poverty through education.  The main programme focuses on creating 'Schools of Hope' in slum and deprived areas of Kenya and Tanzania. These provide a safe environment for children to study out of school hours.   In 2016 over 40% of Form 4 students from the seventeen longest established schools went on to University & higher education, an amazing achievement which surpasses the state school results.

My cast was off in time for usual hectic Christmas - ten for Christmas dinner, twenty-two for family dinner, indeterminate number for New Year's Wild West party - guess what I went as.
I had intended to fly out to California to finish the ride after Christmas, and had in fact booked a flight for early January However when I checked my insurance I found my wrist would not be covered at all for three months, so to be on the safe side I took the decision to delay until the spring.

Of course I had to buy her a couple of sheep, and they had to be my old favourites Welsh Badger-Face - I used to have a small flock of around ninety.