Another One Bites the Dust.

Friday 23rd April. By using Google Earth I had traced out a slightly more pioneering route through the desert further away from the main road. However I had not allowed for the new G3 which kept thwarting my plans and making the riding a bit more pioneering than I had intended. First we had to turn back due to a huge gash in the landscape caused by an enormous new road cutting. We then found that a small valley I intended to ride down was blocked by waste boulders. Nothing daunted we scrambled around and over…. 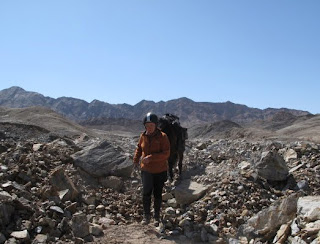 ..and we eventually ended up riding through some lonely desert hills…. 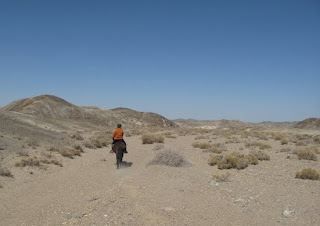 …and came across this beautiful unexpected little oasis 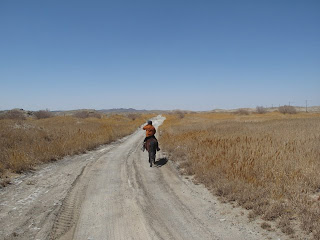 After several attempts, all involving the ritual little piece of wire, Zorbee has at last managed to christen Rowena, and she joined the select ‘ Zorbee Dumpee’ society today. However nothing was bruised but her pride.
We are now staying at Shaquanzi, a tiny settlement centred round an iron mine and seemingly even smaller than when the Trio passed through. Here is Rowena outside our lodgings which could easily date from their time! – our room is behind the third door from the left……. 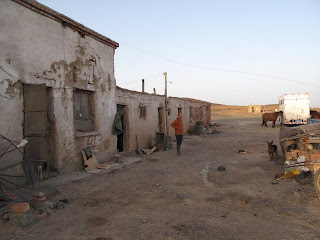 ….and here is the inside view. Rowena slept in the fairy bower, leaving her elderly aunt to doss on the dirt floor (but I did have my extremely comfortable air bed). 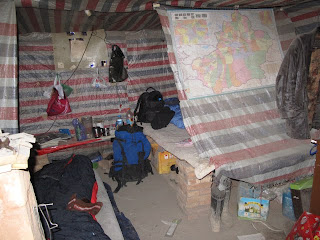 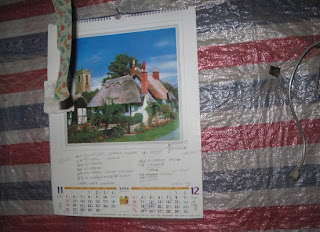 We Arrive in Xinjiang

Thursday 22nd April. We have just arrived at Xingxingxia on the border between Gansu and Xinjiang, and are waiting for the Animal Health inspectors to give us the all clear to continue. They are quite accustomed to dealing with lorry loads of sheep, cattle, donkeys and even horses, but are a little unsure what to do with travellers who are hoofing it. 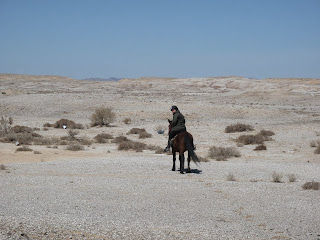 We had a perfect day for riding. French and Cable describe places in the Gobi where ‘the ground was covered in with small pieces of white porphyry which looked as though a slight snowstorm had fallen’ and the photo above illustrates this. But only two days ago it was the real thing! 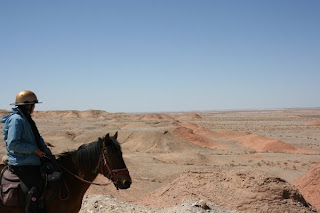 The desert scenery has become more wild and beautiful as we move northwards. 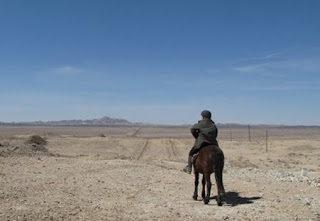 Coming over the brow of the hill to the final plain before Xingxingxia, which is to the right of the large hill on the skyline. The straight line of the main road can just be seen in the far distance. 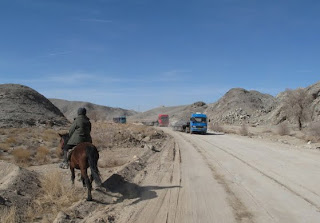 Xingxingxia takes its name from the ravine at the end of which it stands. According to French and Cable it originally meant ‘Ravine of Baboons’ due to the baboons which came down to drink here, but it is now taken to mean ‘Starry Gorge’ after the quartz outcrops on a nearby hill. The baboons have long gone, and neither did the ravine look very starry when we rode through, due to the constant line of lorries throwing up dust on the gravel track which winds along the bottom. Due to construction of the new G3, they have been rerouted along the old road.
Posted by Megan Lewis at 14:32 No comments: 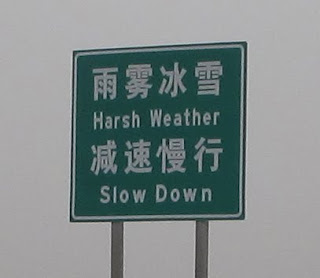 Wed 22nd April. This strangely confident road sign we encountered just before we entered the Gobi proper became self explanatory when we woke up at Liuyuan truck town yesterday to find blizzard conditions had set in again. 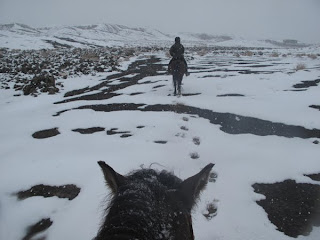 However the weather brightened up in the afternoon although it was still bitterly cold and we were wearing nearly our entire wardrobe in an attempt to keep warm. In true form, Peng managed to find a little camp of construction workers who let us park the truck by them and fed us a wonderful noodle supper cooked in an oil drum – below is the camp cook in his kitchen tent. 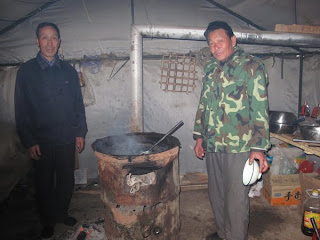 Rowena and I narrowly escaped freezing overnight in tent and truck respectively, but Peng of course somehow managed to wangle a place in one of the stove heated tents!

This morning dawned bright and we rode through some beautiful desert scenery of plains stretching away to far hills. In the afternoon we reached Malianjing, where French and Cable reported seeing the wild irises which give the oasis its name though it was too early in the year for us. In the photo below the white is not snow, but the white alkaline deposits which are typical of Gobi waterholes. 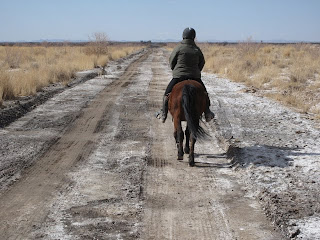 Once again the inimitable Peng has managed to find us food and lodgings courtesy of the Hua Zhong construction company building the G3 expressway – this time in the site managers headquarters in Malienjing! Here we are with some of the genial hosts who rescued us from another arctic night. 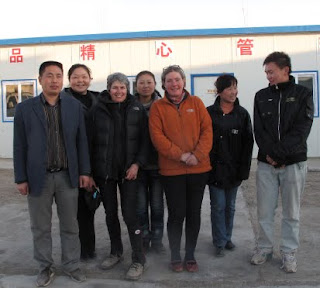 Monday 19th April. Yesterday we set out across the Black Gobi – one of the most feared legs of the Gobi crossing from Anxi to Hami – this section crosses the Gobi proper and it will be interesting to see how many of the oases have survived, as they were little more than water holes in the middle of the desert in the days of French and Cable. They referred to the Anxi-Hami leg as the Twelve Brackish Water stages, so we have stocked up with water containers to carry good water for the horses. Apparently mules and donkeys could drink it, but horses were often adversely affected.
We have so far been able to ride off road the whole time, often well away from the main road along earth tracks servicing the new electricity pylons that are being constructed across this part of the Gobi. Huge wind farms dominate the landscape. 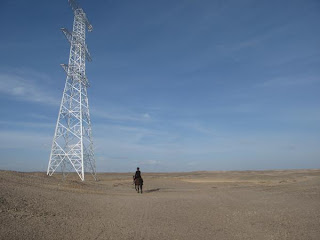 Last night we reached Baidunzi, or White Tower, a little oasis with a long history including a Song dynasty general who was killed here by the Muslims. The Trio mention a clear spring of bad quality -the water has now been dammed back to form a couple of picturesque lakes below the old tower. 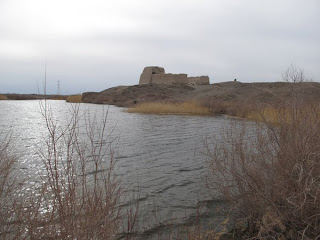 We had a different water source from a deep well in the courtyard of the small ‘hotel’ we happily found on arrival. We were assured that everyone drinks it, and certainly the horses have suffered no ill effects. The little blue building by the water pumps was our room for the night. 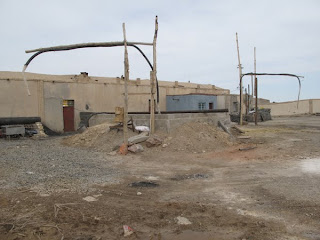 The Black Gobi is so called due to the black stones which cover the ground, and which in some places give the landscape an almost industrial slag heap look. 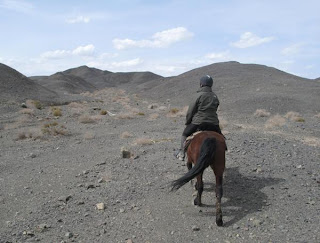 I have been concerned about encountering spring dust storms, but did not think we would be responsible for creating them. The Chinese are in the process of creating a new expressway G3 across the desert, and although it often provides a good fine earth surface to ride on, the strong wind today blew up enormous clouds of dust from under the horses’ feet. 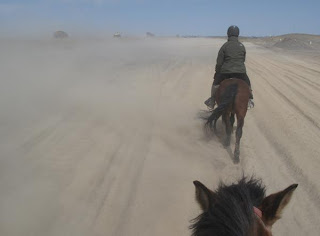 Saturday April 17th. On our day off in Guazhou (formerly Anxi), we did the tourist thing and went for a jaunt to Dunhuang, leaving the horses penned in front of the outside toilets with instructions to use the Mens on the right. 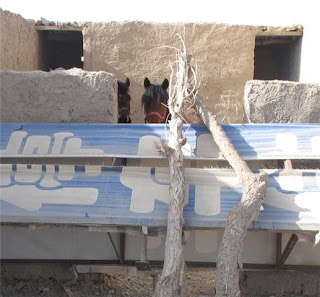 The main attractions at Dunhuang are the ancient Buddhist cave temple complex at Mogao and a crescent lake set among huge sand dunes, both visited by the Trio many years ago. But I am sure they would be horrified at the commercial developments that have taken place to accommodate tourists such as ourselves. The formerly secluded and peaceful lake is now shrunken, and a venue for sand surfing, archery, paragliding and camel rides. And the 140rmb fee to get in was steeper than the sand dunes themselves. 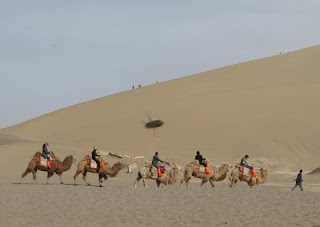 Travellers on the Silk route? No - happy camel riding day trippers bedecked in their orange sand boots. I have no idea what the UFO in the back ground is. Any suggestions? Perhaps a clue lies below. 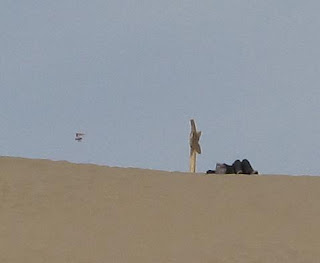 Rowena has seen it all before, but it must be the first time she has been buzzed by a paraglider in her reveries. 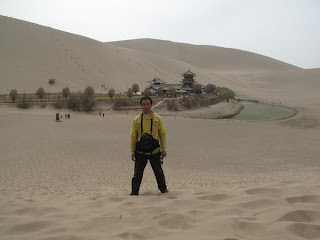 Mr Peng strikes a manly pose in front of the lake and the new temple which has been built there. 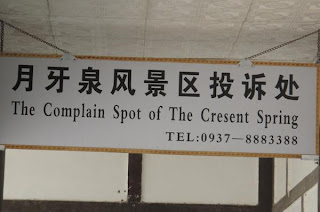 No complaints apart from the English.
Posted by Megan Lewis at 14:00 No comments: