All may seem quiet on the western front here in Wales, but I have been busy catching up on paperwork and domestic stuff, sorting out photos for the several talks I have been asked to give, and considering possible further exploits next year - perhaps continue west across Ireland and Newfoundland?
Also unfortunately while moving a feisty young Welsh pony filly from one field to another I had a bit of a 'turn'. When I went to A & E to have it checked out as a precaution, I was whisked into hospital with a suspected heart attack and had to lie in bed for a week hooked up to a monitor until I could have an angiogram.  This showed I probably had Takotsubo Cardiomyopathy (Octopus pot syndrome!) which is apparently prevalent in older women under intense stress.  The good news is that it does not cause permanent damage to the heart, and I suppose it is a good excuse to take it easy over Christmas, though I doubt that will happen!

On Tuesday Bolashak our Kazakh steppe stallion arrived safely at his new home in Holland with the Van Klooster family.  You may remember little Emma Van Klooster rode and fell in love with him in Kazakhstan, and joined us for part of the ride from Newhaven to Greenwich in July.  Emma and her beloved Bolly near Guildford ...... 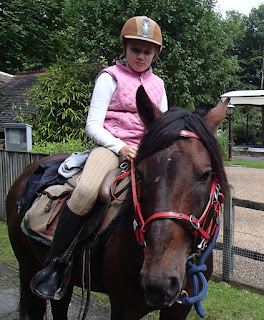 Daughter Iona is still harping and singing in the band of up and coming star Laura Mvula, who has been shortlisted for BBC Sound of 2013 - previous winners include Ellie Goulding, Adele and Jessie J.  See  http://www.bbc.co.uk/programmes/p0129r64 for BBC performance 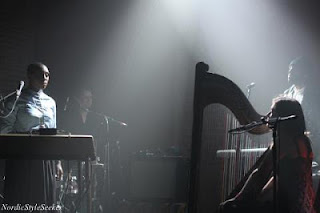 Iona is off on a mini tour to Holland with Laura and the band in the New Year, and to a music festival in Texas in March.

Iona is continuing to be very popular for weddings and other gigs - if you are interested in booking her see http://www.ionathomas.co.uk/
Posted by Megan Lewis at 13:55 No comments: