It is some time since I wrote on my blog, and I will attempt to bring it up to date!
After reaching Kyzlorda at the end of October, and settling Zorbee in his winter home, I drove to Atyrau to catch my flight home. This was about another 1000miles/3 days drive, and I was very glad to have the company of cousin Rowena, who lives in Atyrau but came down on the train to join up with me.
The first part of the drive was along the new M3 to Aktobe, which is part of the planned trans Asia expressway system - as you can see, it is pretty whizzy - but unfortunately stretches like this do not last for long ....... 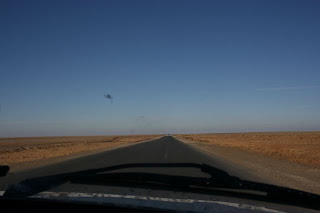 ....and it is soon back to the earth tracks running parallel to the road under construction. 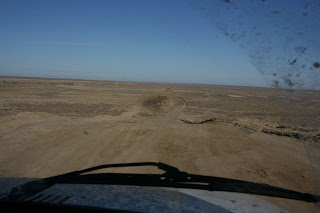 It gradually became clear that the jeep was suffering some sort of radiator problem, but we fortuitously came across a water truck which enabled us to replenish the water. The truck driver is evidently most amused by our antics - the Kazakhs are used to expatriot oil men roaring past in brand new BMW or Suzuki 4x4s, and found the concept of two unaccompanied foreign ladies of a certain age tootling across the steppe in a clapped out Lada eccentric to say the least. 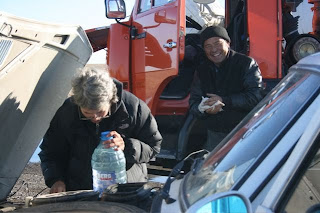 We plugged on for another couple of hundred miles to the next small one horse town in the middle of nowhere, where we managed to track down a back street garage. The mechanics below sorted out the problem while we resisted offers of betrothal to the one eyed Romeo on the right - they did not seem too concerned that we already had husbands. But he made an impressive job of personally blowing out the air lock which was causing the trouble. 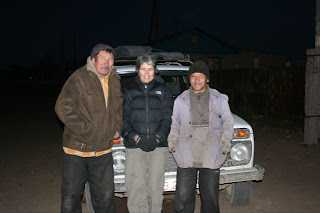 On the third day we followed the A340 from the bright lights of modern Aktobe to the bustling oil city of Atyrau. One would imagine that there would be a fast and well maintained expressway linking two such major Kazakhstan urban centres, but we were soon to discover otherwise. For over 200 miles we were unable to drive faster than 20mph, the reasons being obvious if you look at the photos below. The potholes could easily swallow a small juggernaut and it was a toss up whether to drive around or through them. You may be wondering why the Lada lights are on - in Kazakhstan it is illegal to drive outside towns without headlights even during the day. Not such a bad idea when you see the speed at which traffic travels along narrow and bumpy roads. Not that there was much traffic here. 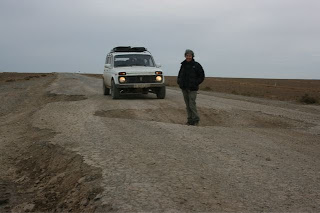 The alternative (if it is not during the thaw) is to drive along the maze of earth tracks at the side. 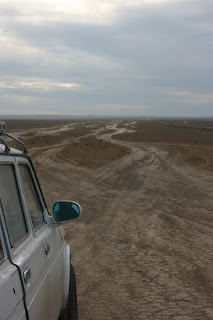 A desolate view looking west along the A340 to Atyrau as dusk starts to fall. With the Lada playing up and the night temperatures below freezing, it was not an occasion when one wanted to break down, but at least we were equipped with tents and sleeping bags if the worst had come to the worst.
Posted by Megan Lewis at 12:17 No comments: