Schoolchildren for Children - The Video!

It must always be remembered that one of the main reasons for the Long Horse Ride is to raise money for disadvantaged children via the charity Schoolchildren for Children.http://www.schoolchildrenforchildren.org/
It is now possible to view a video about the aims and achievements of the charity on Youtube. See http://www.youtube.com/watch?v=WtxrUKt1558

If you have enjoyed this blog, and/or been moved by the issues and heartrending stories depicted in the video, please support the ride and this very worthy cause by donating to my page at http://www.justgiving.com/meganlonghorseride

ALL monies raised by the ride go directly to the projects supported as all administration costs are covered by separate sponsorship, so please give generously.
Posted by Megan Lewis at 17:19 No comments:

Chinese New Year has come and gone, as has the end of 2010, and hopefully the Year of the Rabbit 2011 will hop along without too many traumas.
The children celebrated our New Year with a fancy dress party - theme 'Around the World' - which gave me an excuse to dig out various items of clothing I acquired while on the North West Frontier (if you want to see photos of this 2006 trip, see http://www.cwrtycadno.com/mypics.htm towards the bottom of the page) 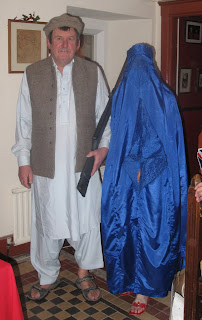 Iestyn and me in sartorial splendour as Afghan mujahideen and spouse - the latter apparently held at gunpoint in his harem. Fortunately we live in a more enlightened society in Wales, so here we are again in more relaxed mode. 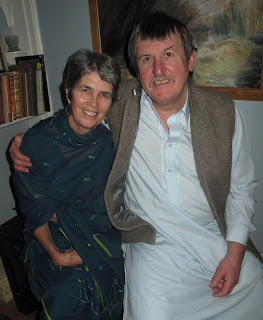 We were all issued with passports which were checked at the door by airline stewardess Gwenny before a fun packed evening of quizzes, tequila shots, bonfires and singing round the piano. 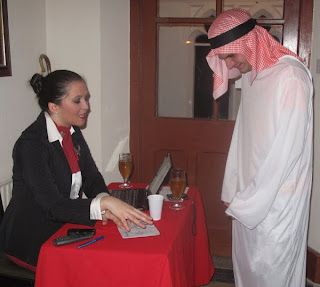 Shay and our sheep dog Dyfi carousing the night away with a couple of bottles of champers - Dyfi looks decidedly the worse for wear. 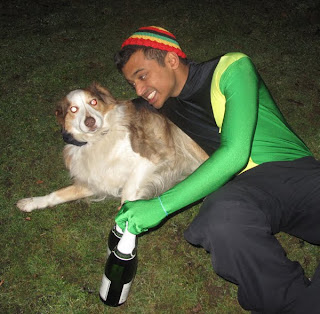 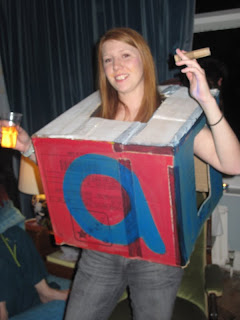 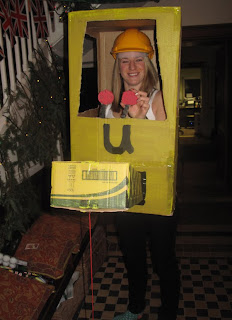 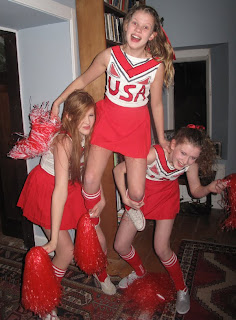 And of course it all followed a White Christmas 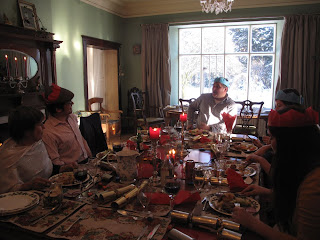 which meant an obigatory sledging session after Christmas dinner - 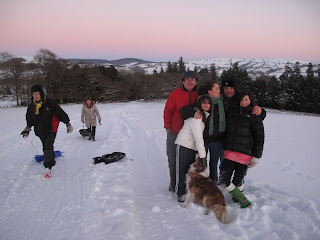 A novel way for brothers in law to bond - Iestyn and Russell in full? flight 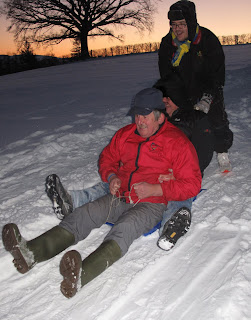 Dyfi equipped for the ski slopes, but doubting if dogs are really meant to do this. 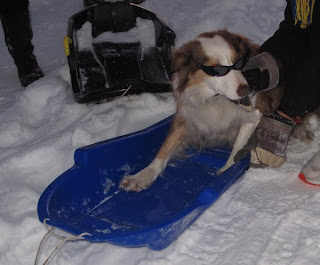 Poppy fields in the Land of Oz

Still way behind with my blog posts! My latest excuse is that I have been waiting in vain for requested photos of the Supreme Championship at the Victoria All Welsh show. These were taken during my judging trip to Australia at the beginning of December. I had a busy three days at the show judging a wide variety of ponies and cobs both in hand and ridden, before visiting the famous Nawarrah Park and Weston Park studs where I saw some wonderful cobs and ponies - here I am with Janet Evans at Weston Park. 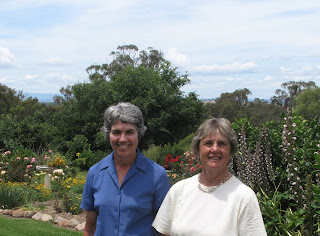 The next few days were spent with friends Chris and Janet Murphy on their Welsh pony stud in lovely country near Canberra. http://keyiwelshponies.com/. They own the young colt Pontsteffan Simwnt, by our stallion Cwrtycadno Cymro - he flew out to Australia in 2009, and has just produced his first foal to everyone's excitement - here is said foal with proud father looking on. 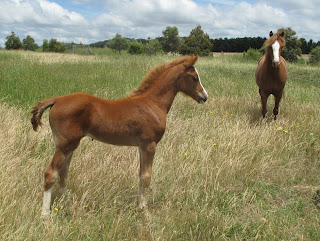 The following weekend I flew over to judge at the Tasmania Welsh show. As my co judge Kathy Sheil of the Dukeshill stud had unfortunately fallen ill at the last moment, I ended up judging all the classes which made for a challenging day. I was very taken by Tasmania and a bit sad that I had had to cut short my trip - fortuitously as it turned out, as I just missed the Heathrow closures caused by snow! I had a most enjoyable and relaxing stay with Welsh pony breeder Tina Taylor of the Nattai River stud http://www.nattairiver.com/ and her husband David, who runs a large sheep station near Campbelltown. Tina's grandfather and mother were responsible for early imports of Welsh ponies to Australia. Here are Tina and David in front of their delightful home which is set in the middle of a beautiful garden. Some farmland is given over to the remunerative crop shown below 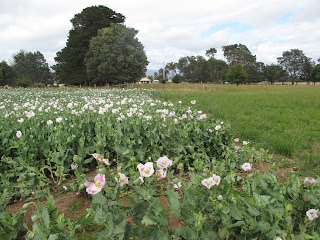 If you don't recognise it, it is opium, which they produce under licence for medicinal purposes, e.g. for codeine!

I was also delighted to receive my second Australian sponsorship from Welsh cob enthusiast Sabina, who has provided me with an Acu-light http://www.acu-light.com.au/ . This heals injury and relieves pain by applying laser light to acupoints in both humans and horses. I am sure it will be an invaluable resource in the months to come.
Here are Janet (left) and Sabina (right) at Gundegai in front of the monument to the Dog on the Tucker Box which we passed en route to Janet's home. 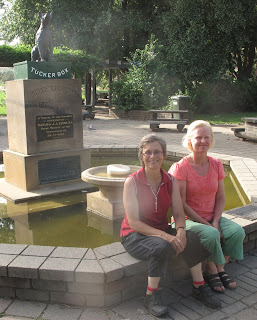 I was very chuffed to visit it, as the last time I did was when my family spent some time driving round Australia nearly 50 years ago after my father retired from the Malaysian Education Service. In those days it was stuck by itself at the side of the road, whereas now it is surrounded by gardens and merits a visitors centre. If you want to know the story of the Dog click here.
Posted by Megan Lewis at 14:58 No comments: