Bogged Down and Iced Up 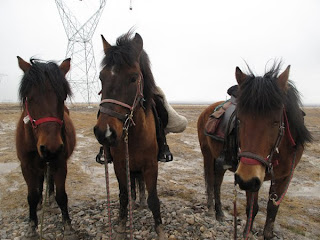 This photo is the result of an aborted detour on Saturday to Hongshan (Red hill) where the Trio evangelised at a fair on a nearby celandine meadow. I had carefully planned a cross country shortcut on Google Earth at home about a month before, but it unfortunately failed to take into account the large Chinese bog in the way. Here are our trusty steeds L to R Zorbee, Bajiu and Shandan, standing disconsolately on a small island of stones while Rowena scouts for an escape route.
Having extricated ourselves from the mud, although we failed to reach our aim, we had an enjoyable off road ride over sandy and rocky hills past a couple of lakes and a gang of surprised Chinese workmen engaged in erecting yet more of the electricity pylons which are gradually enveloping China. We came down into the little oasis town of Chijinpu as the snow started to fall again. 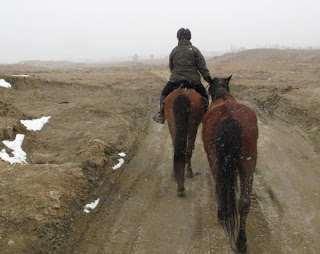 There we survived yet another freezing night in an unheated room huddled up in our sleeping bags with all our clothes on. The following morning we had a quick foray in the truck out through the ice bound countryside to Hongshan, the hills looking more white than red with a heavy frosting of snow. It took some imagination to visualise a celandine meadow in the frozen wastes.
Then we were off again on horseback through a bitter wind over the bleak and frozen desert as thin snow began to fall. 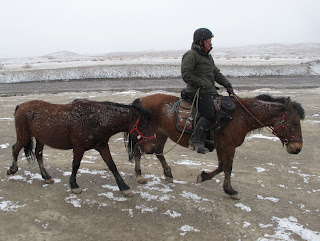 It was a cold and weary pair of riders that turned up at the only buildings for miles - a coal depot with no lodgings. And truck had broken down in Chijinpu, though Peng sorted it out during the day. Happily the managers took pity on two frozen foreign women of a certain age. Not only were we shown to a room with bunk beds and a WORKING RADIATOR, but they also gave us an electric fire. A hot shower in the washroom, and a noodle supper in the kitchen, and we were considerably more perky.
L to R. Rowena in her winter tellytubby outfit, Mr Liu who took us in, Mr Zhang who cooked supper for us, another Mr Zhang, the redoubtable Peng. 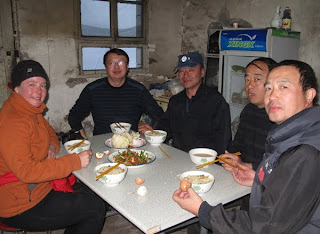 Today (Monday) we arrived at Yumen or Jade Gate, but it was a little disconcerting to see this sign on the way, considering we have just spent six days riding from Jiayuguan. 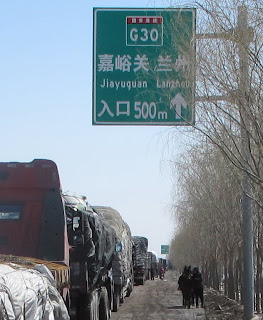