Handing Over the Flag

Last Wednesday August 1st I was delighted to be invited as a guest of honour to a British Equestrian Federation reception on board the Cutty Sark in the presence of HRH the Princess Royal.  In Beijing in 2009 I was presented with an Olympic flag by the Chinese Equestrian Association at the official starting ceremony. I flaunted it on a pole riding into Greenwich, and I was now given the opportunity to officially hand it over to the Chairman of the BEF, Keith Taylor.I also gave a little speech which seemed to go down very well - at any rate the Master of the Worshipful Company of Farriers subsequently asked me if I would give a talk to them at some point!

Here I am hobnobbing with Princess Anne, who came over to quiz me about the journey - she was most engaged and friendly, and we were also able to congratulate her on the wonderful success of daughter Zara in the Olympic eventing! 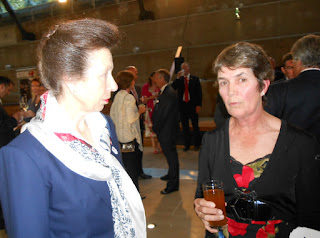