10th May and Mother's Day in Canada!  The Trans Canada rail trail ended at Carleton Place, so I cut across country via small roads towards Perth.  Annoyingly my cell phone package ran out, and as feared it proved impossible to extend it via the phone in spite of the previous assurances of the assistants at Bell.  Happily I was stopped by John Hopkinson formerly from Brighton, an ex Brit who has lived in Canada since the 1950s, and we were soon joined by Maureen and teenage daughter Cherish - I immediately took advantage of her youthful nonce to tackle the intricacies of Bell technology, but it still took over an hour to sort it out. 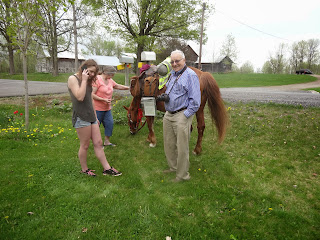 Cherish succeeds in communicating with a live person while Maureen acts as groom and John adds moral support. We then had to use Maureen's credit card to pay (I reimbursed her with cash) as Bell would not accept my debit card.   But I had a working phone at last and we parted like old friends!
A little further down the road a couple in a car stopped and offered me a place to stay for the night conveniently just where I was aiming for.  Psychoanalyst Arthur Leonoff and wife Linda (a multi-birth consultant) lived in a beautiful old stone house built by one of the many Campbells who have inhabited the area since the early 1800s. 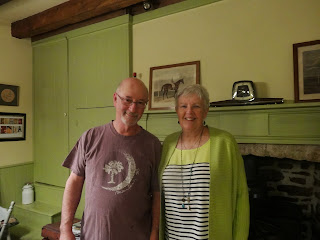 Lady had a huge field and I retired to a luxurious bedroom after being wined and dined.

Cheerful walking buddies Kathy and Renee who I met on the road the following morning May 11th. 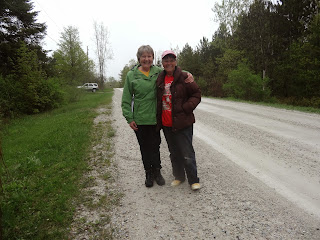 They turned up in a car later to donate a flashing road light for me to use!
Soon after I reached the lovely Centennial Frontenac Trail which follows an abandoned railway line from Perth to Sharbot Lake past woods and lakes...
I was now expecting to spend a few days crossing a region of forest and swamp, and with temperatures rising, was concerned about the onset of the insect season.  A few mosquitoes had already been making their presence felt and I did not want to get caught in the middle of the wilds tormented by bugs and with no shelter.  Hopefully I would make it to the other side without too much trouble, but I hoped to find buildings for Lady where necessary.

I didn't wait to see if this was dead or alive.... 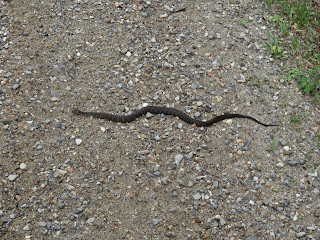 I was aiming for Sharbot Lake, but Lady was feeling a bit off colour so I decided to look for somewhere near Maberley with shelter for Lady, and was taken in by the lovely Sue Howlett, shown here with her horses before leaving for work on the morning of May 12th... 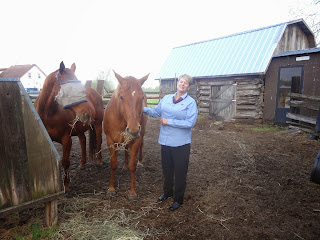 Lady spent the night in the barn with a large pile of hay though the mosquitoes were not too bad.
Posted by Megan Lewis at 01:19