On our last legs

Ready to set off on Wednesday 12th April   Sharon and British expat neighbour Anne Margadant who came over to see us on our way... 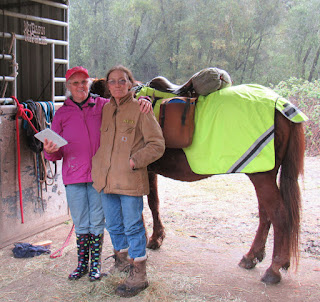 Lady and I still had a bit of a pull up and over the Mayacamas Range, though no danger of fire with all the rain! 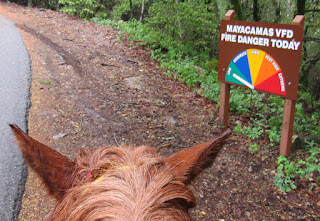 But although the road was narrow and winding, as promised there was not a lot of traffic and we made it safely down the other side.

Stopping for a rest and a burrito near Glen Ellen on the Sonoma Highway to Santa Rosa..... 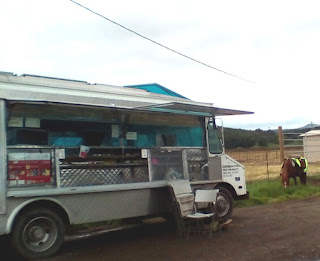 Further down the highway I came to some paddocks with horses, and a sign for 'The Pony Express'.  As a horse and rider who have covered the Pony Express Trail in its entirety it seemed only natural to see if we could get overnight accommodation there, and I was delighted when proprietor Linda Aldrich appeared and welcomed us with open arms.... ﻿ 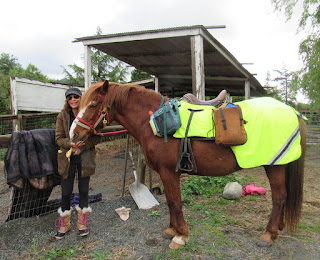 Lady was given a field shelter with hay and feed, and Linda took me in to the house for shower and  supper. My sleeping bag stayed packed away once more!  The Pony Express turned out to be a charitable organisation initiated and run by Linda to mentor and empower teenagers with problems through building relationships with rescue horses.  We had a lovely evening chatting over a glass or two of Californian wine.
The next day Thursday 13th April I set off along the Sonoma Highway ... 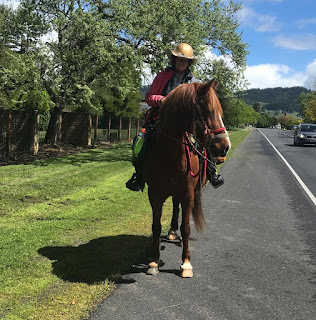 ..Unfortunately because of the last minute change of plan, I had not had the opportunity to research a more off-road route to Santa Rosa, though I was aware that there were better options.  Once I arrived in town I was able to revert to the route I had planned out at home.  Many large American towns have riverside paths which avoid entangling with traffic, and the Greenway Memorial Trail in Santa Rosa was no exception. Here you can see we have ridden underneath the 101 Freeway which runs all the way up the Pacific coast of the USA. 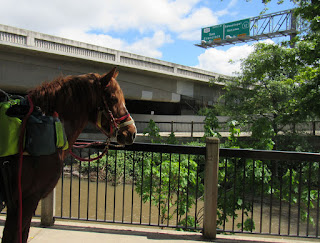 I was sometimes not sure if horses were allowed on these trails, but they were so indispensable to the ease of my journey that I am afraid I followed the principle of just do it and ask questions afterwards. In the event the only time I was prevented from doing so was on the Trans Canada in Quebec.
We carried on along the Joe Rodata Trail to Sebastopol, coming across occasional evidence of homelessness once more... 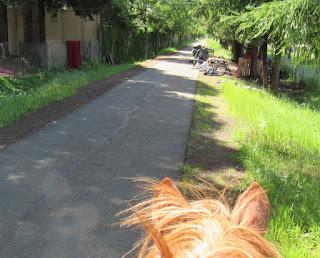 Arriving at Lotus stables in Sebastopol... ... 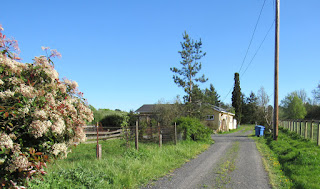 ...where the horses were staying courtesy of owner Amity de Fontaine.     I say horses because I had arranged to meet Mike and Bonnie here with Mo, as Mike was going to join me on the last leg to the Pacific coast.  Unfortunately in all the excitement of settling Mo down with Lady (we had to put them in separate pens as he was hassling Lady unmercifully) I completely forgot to take photos of the lovely Amity and her partner.
I was running a day late, but in fact this fitted in fine with our schedule, as the place we had booked for two nights just outside Occidental was only half an hour's drive away.  This was Shanti Occidental  owned and run by Elizabeth Medgyesy who had a comfortable annexe which could take the three of us. We had found her thanks to a friend who coincidentally turned out to have a friend living there!  Occidental is a lovely little town with a Bohemian atmosphere set among redwood trees in the hills to the north of San Francisco.  It is a magnet for people looking for an alternative lifestyle.  The well travelled Elizabeth practises permaculture, and keeps some sheep which look similar to our ancient Welsh Mountain badger-faced sheep breed - perhaps they are New World descendants!