Vet Visit and Goodbye to the Huang He

Shandan is a bit prone to mysterious accidents, twice unaccountably scraping his back in the luxuriously padded trailer. The latest is that he somehow managed to cut his stifle on the trailer. He is not at all lame, but it was a nasty little cut which needed stitching - so Peng went off to Zhongwei find a vet. As there are no modern veterinary facilities out here in the sticks, Shandan had to be pulled over on his side in the yard and held down for his little operation. As you can see below, the vet made a commendably neat job. And all for only £20! I have a course of injections to give him for a few days, and he took the first one like a rock this morning. 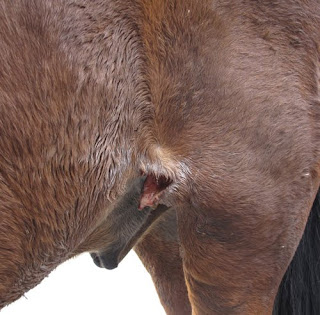 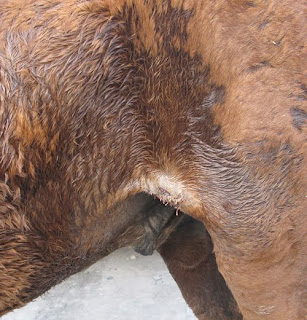 He was looking very perky after a short day walking, so we should be able to step up the mileage again pretty quickly. Here he is with Hua above a bend in the Huang He near Shapatou, to the west of Zhongwei, and still in Ningxia province. This is probably the last sight we will have of the great yellow river that we have followed for so long. 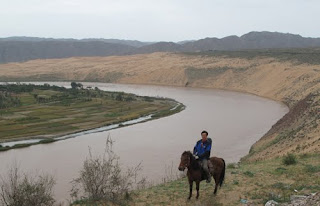