A very belated post as usual, since the last week has been a mad whirl!

We had been extremely disappointed when the planned venue for my arrival reception in Greenwich fell through due to Health and Safety issues only a week before we were due to arrive, and it looked as if my arrival would be a complete anti-climax.  However every cloud has a silver lining, and as a result of this setback the King's Troop came to the rescue.  We were kindly offered the facility of the Royal Artillery Barracks in Greenwich as a venue for the arrival ceremony - a much grander option in any case! 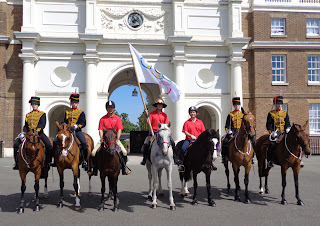 So on the morning of Sunday 22nd July, accompanied by Rowena and Peng Wenchao on Harry and Bolashak and two riders from Mount Mascal stables, and escorted by four members of the King's Troop in full regalia, Zorbee and I rode into the Royal Artillery Barracks.   Here we were met by the representative of the British Equestrian Federation, David Gadsby, and a representative from Greenwich council.  I was able to hand over the Olympic flag that had been presented to me in Beijing by the Chinese Equestrian Association in April 2009, which we had carried with us through nine countries, and which I flaunted on a pole as we rode through the streets of London.

A crowd of family and friends were also waiting to greet us, as were a posse of media, so it was another photo fest. Zorbee was prepared to look suitably bored, but luckily we were right next to the Olympic shooting venue with attendant gunfire, so that is why he has his ears pricked in the photo above!

Then it was back to a cafe on Shooters Hill for a small get-together and opportunity for media interviews - one of which was shown on HTV Wales news that evening. See http://www.itv.com/news/wales/2012-07-22/carmarthenshire-womans-10-000-mile-horseback-trip/
Zorbee and Bolashak were carted off to Danson Park for the Bexley torch celebrations and I followed later in the car with Gwenny.
The two horses had a corral in the park where they received the public, and they actually saw the torch passing - I know, because I was only alerted to its arrival because I was wondering what Zorbee was looking at!
Posted by Megan Lewis at 13:11