Newhaven to London. Part One

There was great excitement on July 5th when I went to fetch my Chinese team member Peng Wenchao from Heathrow airport on his first trip abroad - having been with us on the first leg, he was to join us on the last leg of the journey.   We were joined later by Harry Tse of horseball China, who has provided so much invaluable support to the ride, and his son Jeremy who was going to be part of the team on the final stage.   After a day sightseeing in London we all drove down to Wales for a few days preparation - Harry, Peng and Jeremy cleared out and spring-cleaned the lorry and even painted the living area!
Friday 13th July was perhaps not the most auspicious date to set off on the journey to Newhaven with the two horses Zorbee and Bolashak.  But we arrived without setback at our overnight stop at Swanborough Farm www.swanboroughfarm.co.uk  to find Rowena knocking back the wine with host Will Greenwood. Many thanks for all your help, Will!
We were short of a mount for the three of us, and as a Welsh pony breeder who has tried to use native breeds where possible on the ride, I had been keen to include a Welsh breed on this last push.  When I contacted Angela Kember of the Southeast Welsh Pony and Cob Association at the last minute, to my delight she immediately suggested her own Welsh cob gelding Danaway Black Harry. And in spite of her busy schedule she duly turned up that evening with trailer and Harry.  He spent the night in the yard, Zorbee and Bolashak had a large grassy field and Rowena and I kipped down in the stables in our sleeping bags.
We were up bright and early the next morning when Mike arrived to box Zorbee down to Newhaven ferry port for photo session and start.  Then it was off along the cliff top path and up bridleways over the hills to meet Peng and Rowena on Bolashak and Harry at a prearranged venue on the South Downs Way.  Here is Rowena on board our new team member Danaway Black Harry. 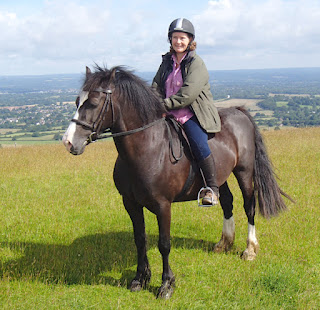 It was a breezy day's ride along the South Downs, and we were glad of Peng who acted the true gentleman in opening all the many gates!  We even managed a bacon butty break at an opportune burger van in a layby at a busy road crossing to the great entertainment of burger lady and customers alike. Our next stopover at Plumpton College, where the horses were treated to large comfortable loose boxes. And as it was Rowena's birthday, myself and the 'boys' (Peng, Mike and Jeremy) were treated to a suberb candlelit dinner at a very cosy pub down the road.  A bit more sophisticated (though not any more tasty) than the fare produced by Rowena 12 months ago of hash concocted from tins over a camp fire on the Kazakh steppe!

The next day it was another glorious day along the South Downs Way... 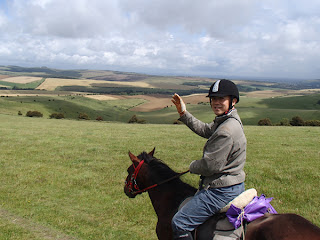 .... passing the Devil's Punchbowl, and stopping for a pub lunch before making our way down the escarpment and out across the Weald to the Royal Leisure Centre at Henfield www.royalleisure.co.uk
We had a tremendous welcome here from Emily Talbot.  Not only were we treated to a curry in the evening, but a guided tour of Hickstead the next morning when we had our photos taken under the infamous Derby Bank!
A damp morning the following day and we were directed via a back route onto the Downs Link Way, which links the South and North Downs Ways via an abandoned railway line.  We were joined for the day by Cheryl Hillman on her super little Section B gelding Llanarth Grenade...... 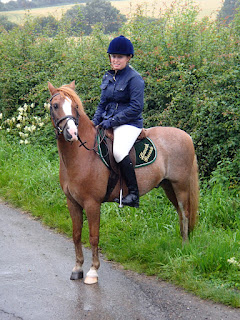 I was delighted to have a Welsh pony along, and even more pleased when they raised £125 for our beneficiary charity ChallengeAid!
Horsham was our next stop, and we were hosted by the Bridge House Equestrian Centre http://www.bridgehouse-equestrian.co.uk  . Rowena and I slept in one of the classrooms, and a priceless evening's entertaiment was provided by the beginner's agility dog classes being held in the indoor school!
While in Kazakhstan, Bolashak was ridden by a little Dutch girl Emma van Klooster, who fell in love with him.  The Van Klooster family were back on holiday in Holland this summer, and came over to support us for the last few days to London. So on the following day (Tuesday 17th July) Emma took over the ride on Bolashak along the next section of the Downs Link .. 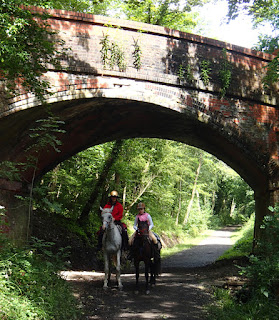 ..... to the Albury Equestrian Centre www.surreyriding.co.uk  where we were being put up for the night, courtesy of Caroline Xuereb.
The centre were aware we were bringing a stallion, and in evident expectation of some rampaging beast, had asked us to stable him. When Welsh cob Harry was turned out in a paddock and strutted his stuff, we were politely reminded of this request - they were a bit taken aback when we pointed out that the stallion was the one with the little twelve year old girl! 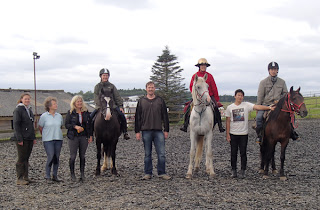 Group at Albury Equestrian Centre.  Mike seems to have grabbed centre stage.  Fifth team member Jeremy Tse is between me and Peng.
Posted by Megan Lewis at 12:33